“This is an atmospheric, effectively eerie script that feels big, even with its contained settings and handful of characters. It makes for a compelling tale that explores intriguing ideas regarding the modern age and its obsession with TV.”

“Evelyn’s infatuation with the characters on Life at Sandy’s will undoubtedly resonate with audiences. To become fully engrossed with a show, to forget about the world beyond its frame, is a common occurrence, nowadays. This script takes full advantage of that fact, crafting a supernatural tale that still feels grounded through a level of realism. The writing is smooth and clear. The story is easy to follow and understandable. There’s a foreboding and a sense of dread that fills every page.”

“This is a timely, low budget horror that could play well on streaming platforms like Netflix. It isn’t cast-dependent; the story itself is enough to fuel the narrative and to draw in audiences.”

“Life at Sandy’s is an inventive and genuinely creepy horror story with a fascinating high concept.”

After the death of her mother, Evelyn, an aimless American, becomes stuck in a small Norwegian town with her overbearing aunt. As she descends into a paralyzing depression, she is lured in by the characters of a friendly sitcom who soon offer her a terrifying yet tempting choice.

Life at Sandy’s is a slow burn, psychological horror film blending fear and humor, like Midsommar in the familiar world of the network sitcom.

After the death of her mother from a lengthy illness, Evelyn, an aimless Norwegian-American woman, becomes stuck in a small Norwegian town. Her friends and life are back in the States, and she’s lost contact with everyone after being her mother’s caretaker for several years. 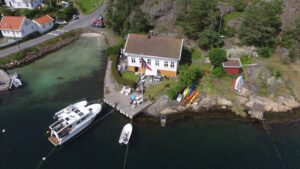 Shortly after the funeral, Evelyn’s overbearing Aunt Marit shows up, claiming she owns the house Evelyn’s been living in and forces her to find a job. Evelyn slowly descends into a paralyzing depression, exasperated by her Aunt’s hypochondria and cruel comments.

She becomes obsessed with an American sitcom and slowly recedes from real life. Sandy, the owner of the sitcom coffee shop, starts talking to her. Showing her that in their world, she can have a better and more fulfilling life. The characters Vincent and Jen treat her like she’s their best friend. Evelyn is seduced. She will soon have to choose between reality and a “perfect” sitcom life.

This story explores themes surrounding identity, isolation, and escapism. The horror comes from the relatability or losing oneself in entertainment rather than facing our negative emotions and trauma. The film will explore the consequences of masking our humanity with the temporary comfort of distraction, the messiness of real life relationships versus the idealized ones in media, and the insidiousness of depression and loneliness.

Sitcoms have a deep emptiness and absurdity underneath their upbeat and comedic plots. No matter what the characters face, their conflicts are wrapped up neatly by the end of the episode or season.They don’t learn, and they don’t fundamentally change. But we feel relief when these characters we are intimately familiar with solve their problems, and it can feel like we’re watching our friends achieve their goals.

The question of why we feel this way is one of my main inspirations for writing this script. 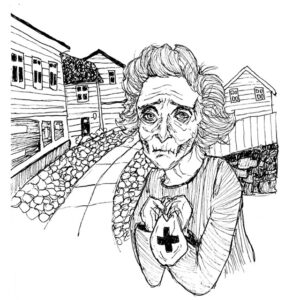 Life At Sandy’s has gotten high praise and sounds like it will be an exciting new film for horror fans, but first it needs YOUR support! Please click the link and help make this film happen…

-Get photoshopped into your favorite sitcom

-Your name in the film’s credits

-Get a custom piece of Norwegian themed art

-Earn an executive producer credit on the film

Visit Life at Sandy’s on Seed & Spark to…

-Read about the crew behind the film