The annual Wicked Weekend event, hosted in celebration of the spooky season, will feature nine film events over five days, including anniversary presentations of NEAR DARK, I KNOW WHAT YOU DID LAST SUMMER, as well as a special double-bill of HALLOWEEN 4 & 5!

Just in time for the spooky season, Popcorn Frights is thrilled to announce its annual Wicked Weekend program celebrating all the eerie, weird, wild, and strange things that go bump in the night! The event, running September 28 through October 2, will feature nine film events plus a host of filmmakers, restorations, and special screenings.

Everything kicks off with the opening night debut of SMILE, the disturbing new horror from Paramount Pictures starring Sosie Bacon (13 Reasons Why) as a doctor whose life unravels as increasingly bizarre forces drag her to the edge of sanity.

Wicked Weekend is also headlined by the North American Premiere of the fun and fantastically splatter-packed love letter to horror anthologies and the VHS era of yesteryear SCARE PACKAGE II: RAD CHAD’S REVENGE, as well as the hotly anticipated sequel to the cult-favorite slasher TERRIFIER 2 featuring the demonic killer Art the Clown who is up to his old tricks once again.

Other highlights include the 35th anniversary of Kathryn Bigelow’s ultra-violent triumph NEAR DARK starring the late-great Bill Paxton and the 25th anniversary of the Kevin Williamson penned (Scream) 90s slasher I KNOW WHAT YOU DID LAST SUMMER starring Jennifer Love Hewitt, Sarah Michelle Gellar, Ryan Phillippe, and Freddie Prinze Jr.

This year’s Wicked Weekend will feature one hell of a family reunion with a special double-bill presentation of HALLOWEEN 4: THE RETURN OF MICHAEL MYERS and HALLOWEEN 5: THE REVENGE OF MICHAEL MYERS, which will include a Michael Myers & Jamie Lloyd costume contest with special prizes and giveaways.

Rounding out the program is the Florida Premiere of SPIRIT HALLOWEEN: THE MOVIE starring Christopher Lloyd & Rachel Leigh Cook in a Nickelodeon meets The Goonies diabolical coming-of-age thriller, as well as a celebration of Alex Proyas’ gloriously gothic and brutal revenge tale THE CROW starring Brandon Lee as a badass antihero in his final electric performance.

Celebrated as one of “The World’s 50 Best Genre Festivals” by MovieMaker Magazine, Popcorn Frights recently wrapped its eighth edition this past August with more than 10,000 filmgoers and industry professionals attending its summer week of wicked films, events, and parties. The ninth annual Popcorn Frights Film Festival will take place August 10-20, 2023 across South Florida with submissions now open via Film Freeway. Shorts, features, documentaries, animation, film and video — all are welcome and can be submitted at the link: https://filmfreeway.com/popcornfrightsfilmfestival 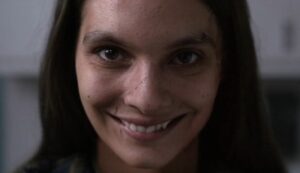 The Crow
United States | 1994 | 102 Min. | Dir. Alex Proyas  A man brutally murdered comes back to life as an undead avenger of his and his fiancée’s murder in Alex Proyas’ gothic revenge tale starring the late-great Brandon Lee.

Ten years after his original massacre, Michael Myers awakens on Halloween Eve and returns to Haddonfield to kill his seven-year-old niece.

One year after the events of Halloween 4: The Return of Michael Myers, the Shape returns to Haddonfield once again in an attempt to kill his now-mute niece.

In screenwriter Kevin Williamson’s iconic 90s thriller, four young friends bound by a tragic accident are reunited when they find themselves being stalked by a hook-wielding maniac in their small seaside town.

A small-town farmer’s son reluctantly joins a traveling group of vampires after he is bitten by a beautiful drifter in Kathryn Bigelow’s ultra-violent genre triumph starring Bill Paxton, Jenny Wright, and Lance Henriksen. 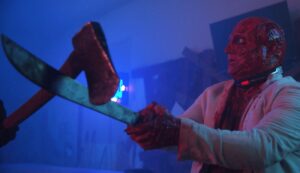 When horror guru Rad Chad Buckley’s funeral turns into an elaborate series of hilarious death traps, the guests must band together and use the rules of horror to survive the bloody game. 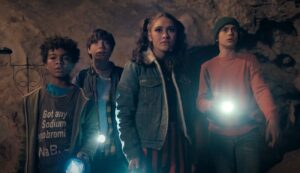 When a Halloween store opens in a deserted strip-mall, three friends, thinking they’ve outgrown trick or treating, decide to spend the night locked inside. But their night of spook-filled fun soon turns to outlandish survival in this coming-of-age thriller starring Christopher Lloyd and Rachel Leigh Cook. 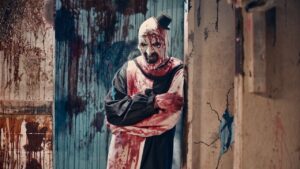 Resurrected by occult forces, Art the Clown returns to wreak bloody havoc on the residents of Miles County, targeting a frazzled mother and her kids.

OUT NOW: Videogram “The Shape”