Bored of box sets on your TV at home? Can’t find anything new to watch on TV? Fear not, if you like horror movies, psychological thrillers, sci-fi and dark fantasy, then Grimmfest is for you. Immerse yourself in 4 days of amazing genre cinema this October.

Grimmfest, Manchester’s International Festival of Fantastic Film will be returning to The Odeon Great Northern on October 6th – 9th, for four high-impact, fear-filled days of the very best in genre cinema. Twenty-one Feature Films and two programmes of short films, all new to Manchester, and many of them international, European or UK premieres. Plus, guests galore, autograph signings and a festival market, offering the finest in horror and movie themed fashions, artwork, gifts and goodies.

Opening Night feature is the UK premiere of the darkly comic and delightfully quirky “fairy tale with Zombies”, THE LONELIEST BOY IN THE WORLD, for which we’ll be joined by director Martin Owen (TWIST), and stars of the film Max Harwood (EVERYONE’S TALKING ABOUT JAMIE) and Ben Miller (ARMSTRONG AND MILLER, PRIMEVAL, BRIDGERTON, DEATH IN PARADISE).  Don’t miss this brand-new UK movie and catch it before anyone else.

AJ Bowen, US star of many previous Grimmfest hits, will be making a welcome return, to present the screening of his latest film, NIGHT SKY on October 8th. It’s a genre-savvy splicing of sun-bleached Desert Noir, freewheeling 70s road movie, and paranoid Science Fiction conspiracy thriller, which he co-wrote as well as starring in. AJ will also be in conversation on the afternoon of the 9th Oct, to talk about his work on a host of seminal genre movies, such as YOU’RE NEXT, HOUSE OF THE DEVIL, THE SACRAMENT and THE SIGNAL.

Feature film highlights this year include a premiere of FINAL CUT, the latest film from Michel  Hazanavicius, Oscar-Winning director of THE ARTIST, a riotously funny movie about a film crew trying and failing to make a zombie movie, with a special introduction by the director. 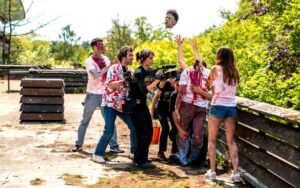 Justin Long (GALAXY QUEST, DIE HARD 4.0, GIRI / HAJI) and real-life partner Kate Bosworth (SUPERMAN RETURNS, SS-GB, BEFORE I WAKE) strike sparks off one another, in the UK-Premiere of Neil LaBute’s (IN THE COMPANY OF MEN, THE WICKERMAN), modern gothic thriller, HOUSE OF DARKNESS, which will also have a special introduction by the director.

Stephen Dorf (BLADE) and Emile Hirsh (INTO THE WILD, ONCE UPON A TIME IN HOLLYWOOD) face off against insane organ traffickers in Ryûhei Kitamura’s  gleefully gory and utterly outrageous THE PRICE WE PAY.

Other UK Premieres will include the ferocious black comedy, FEED ME, for which we’ll be joined by writer-directors  Adam Leader and Richard Oakes and lead actor Christopher Mulvin; the surreal, sulphurous, and utterly savage MEGALOMANIAC, recent winner of “Best Picture” award at the prestigious Fantasia Film festival, introduced by writer-director Karim Ouelhaj: riotous road movie creature feature THE PASSENGER, which relocates the action of THE THING to the back of a moving vehicle, and for which we’ll be joined by director Fernando González Gómez ; and the much-anticipated South Korean giant-reptile-on-the-rampage blockbuster, THE LAKE.

Regional premieres will include CANDY LAND, John Swab’s unflinching exploration of love, madness, religious gaslighting, and brutal murder with an all-star cult cast, including William Baldwin (BACKDRAFT), Olivia Luccardi (IT FOLLOWS) and Guinevere Turner (AMERICAN PSYCHO), with a specially-filmed introduction by the director, and THE HARBINGER, Grimmfest favourite Andy Mitton’s harrowing and heartbreaking response to the recent pandemic lockdown.

But this is just a taster of what to expect at Grimmfest 2022. There are plenty more films to see, shorts and features, a whole array of thrills, chills, high tension and outrageous dark comedy. Plus, a chance to browse a market crammed with unique items and a chance to meet the guests and have them sign autographs. What are you waiting for. Grab you pass, while there are still some left!

All the details over at: GRIMMFEST.COM.