Nick Grossmann and Charles F. Rosenay!!!, billed as “The Shaman and The Showman,” will be bringing “SALEM PARA CON” to Salem, Massachusetts on Saturday and Sunday, November 12-13th. ” SALEM PARA CON” is a world-class Paranormal and Horror convention featuring Special Guests of Honor, over 50 vendors and readers, and other themed attractions. Convention special guests include horror film actor Damien Maffei (Strangers) and Sean Austin, from the Travel Channel shows “Ghost Loop” and “Demon Files.” Additional guests appearing over the weekend include individuals who worked with The Warrens, such as Jim “Mr. Haunted” Petonito and author Jason McLeod. Along with many other paranormal investigators, authors and other special guests, there will be three haunted artifact collectors exhibiting their most valued paranormal relics and rarities. 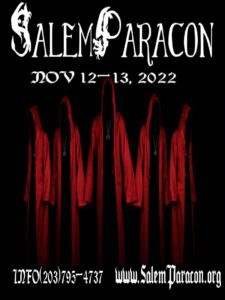 Witch Doctor and Clairvoyant Nick Grossmann felt that after the success of Connecticut’s “PARACONN,” Salem was the obvious next location for this paranormal extravaganza. Grossmann commented, “I think of Salem the way I view New Orleans. They are two of the most interesting places in America for fans and followers of the supernatural. A part of me feels at home here as I have been a practicing occultist for nearly three decades, as well as a paranormal researcher for over 20 years. Charles F. Rosenay!!!, a horror actor and author who has published two books on the genre, is also the host and organizer of the annual Dracula Tours to Transylvania and the GHOSTours to England. He has a passion for New England hauntings, and ghost-hunting is a way of life for him and Grossmann. The producers have presented the sold-out “PARACONN” in Connecticut for the past few years.

“The Shaman and The Showman” have been spending time in Massachusetts exploring the terrain in numerous haunted places such as the Hoosac Tunnel, said to be filled with dark entities, as well as the haunted Grist Mill Tavern, which their investigation team (Ghost Storm Investigations) recently visited. Grossmann added, “As a paranormal pioneer, I can honestly say that place is loaded with spirits, anomalies and apparitions. The video offers a taste of the experience, including the apparition of the man at the haunted table. The recent area explorations are leading up to the convention weekend.

“SALEM PARA CON” will be held at Salem State University, South Campus, 99 Harrison Road in Salem, MA, on November 12-13 from 11am-5pm. There is also a VIP option for early-bird admission. Advance tickets are only $14.99 and there is free parking. The convention is a supernatural cocktail of psychic vendors, horror guests, and paranormal investigators.

Sam Baltrusis: Producer of Documentary “The House In Between II”

Dan and Christine Peer of CTPRT

Rumors, New Edition To Portal To Hell – On Sale Everywhere