Jinga Films is pleased to announce that Julian Richards cult Welsh horror film DARKLANDS will be released in UK, Ireland, Australia and New Zealand on horror streaming platform SHUDDER as part of its Halloween schedule. Starring Craig Fairbrass (Cliffhanger) and Jon Finch (Frenzy), DARKLANDS tells the story of a newspaper reporter investigating the death of a steelworker who exposes a pagan cult plotting a human sacrifice. 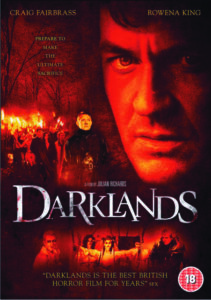 The first indigenous Welsh horror film, DARKLANDS was produced in 1996 and went on to win several awards including The Melies D’Argent for Best European Fantasy Film. After a limited theatrical release, DARKLANDS was distributed on VHS, DVD and broadcast by ITV.

“Surprisingly diverting horror thriller prompting a terrific performance from Craig Fairbrass as a reporter lured into a mire of pagan rituals and the occult by svelte ‘trainee journalist’ Rowena King. Before he knows it, he’s up to his elbows in pigs blood and human sacrifice. The pace builds relentlessly till his caught – literally – on a one-way train to hell and damnation. Black as coal”- The Guardian.

“This will be the digital premiere of DARKLANDS” said Julian Richards “so it’s great that this cult Welsh film from the 90’s can now be discovered by a new younger audience”.