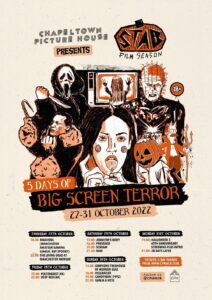 Halloween has always been a special time of year for the cinema, ever since its inception in 2019. Jason Bailey (Director of GRUB & CPH) says ‘audiences always flock to our little cinema over the Halloween period, our beloved annual tradition has always been a screening of Jorge Glau’s classic The Living Dead at Manchester Morgue; but as CPH’s programme and bums on seats are constantly growing, now is the time to create a larger big screen cinema tradition for Manchester audiences over Halloween weekend!’.

Both single film tickets and season passes will be available with accessible pricing in line with CPH’s other event, to help alleviate costs during this cost of living crisis.

To find out more: https://www.cphmcr.com/whats-on

This little cinema has very big plans over the next few years, and we can’t wait to involve you in them! Whether it be as a regular attendee, as a collaborator or just as a fellow film nerd; see you on the big screen!