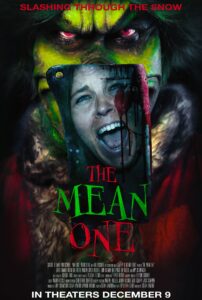 Atlas Film Distribution will release Steven LaMorte’s outrageous slasher parody, THE MEAN ONE, in U.S. cinemas on December 9th. A recent announcement of the film instantly turned it into a viral sensation, with mentions of the movie appearing everywhere from The Drew Barrymore Show to Fox News.

In the audacious new parody, The Mean One (David Howard Thornton) is a hairy, green-skinned grump in a Santa suit, living on a mountain high above the town of Newville, despising the holiday season. Young Cindy You-Know-Who (Krystle Martin), whose parents were butchered by The Mean One twenty Christmases earlier, is returning to town to seek closure… but when the Mean One launches a new reign of terror that threatens to destroy Christmas, Cindy finds a bold new purpose – trapping and killing the monster.

In THE MEAN ONE, David Howard Thornton (TERRIFIER 2‘s Art the Clown) further cements his presence in horror history with this newly-iconic slasher villain. Holiday aficionados who think they know The Mean One are in for a very big surprise.