On November 25 – Black Friday – horror comic creator Matt Schorr returned to Kickstarter to fund his latest terrifying tome, FLIGHT OF THE PHANTASMADACTYLS. This marked his first literary project on the well-known crowdfunding platform. He hopes it won’t be the last. 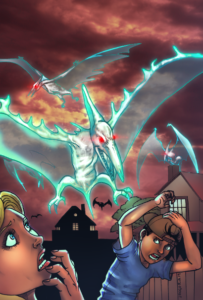 “Flight of the Phantasmadactyls is the fourth installment in my Zombiesaurus Series,” Matt explained. “It’s the latest horrifying adventure a handful of kids face when ghostly creatures from another universe invade their town.”

The first three books featured a Zombiesaurus Rex, Vampire Velociraptors and a deadly Were-A-Saurus. The beasts made their way into our world thanks to slipgate technology previously forgotten and stored in an old, abandoned warehouse. The phantasmadactyls arrive when a greedy opportunist reopens the slipgate, bridging our universe to theirs.

Matt is likely best known for his previous outings on Kickstarter, which funded his award-winning horror comic “Moby Dick: Back from the Deep.” The high seas terror tale gained him a sliver of online notoriety among indie comics and horror circles and earned him the 2021 Independent Creator/Comix Crowdfunder of the Year Award.

His other works include Monster Hunter for Hire and Jesus Christ: Demon Slayer.

Matt’s hometown of Clarksville, TN, likely knows him best as the weekly humor columnist of The Hard Way in the Leaf-Chronicle, an ongoing saga of the trials and tribulations of an unlikely family man. He also hosts a regular podcast called “Tales from a Small Town Journalist” where he interviews community reporters to chat about their unique experiences.