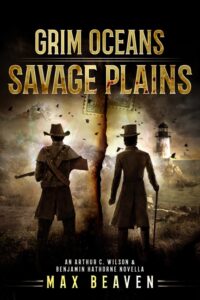 “With the threat to Casper contained, Benjamin and Arthur have again parted ways.

Now months later, Benjamin has returned to his Salem home to try and discover the truth about the death of his parents. His attempts to reconcile his memories of the event with the dreams that haunt him will lead him to a discovery that threatens all of humanity.

Arthur, meanwhile, is trying to put the nightmares of the past behind. An unexpected visit will send him on a journey across the plains and mountains of northern Wyoming. Has the threat returned? Or has a new horror emerged from dark of the mountains?”

The series is set primarily in the frontier west, and incorporates horror elements from Lovecraft’s universe.

Get your copy today at: https://maxbeaven.com/books-2/