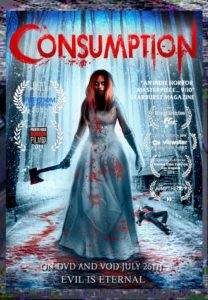 Since the film’s award-winning world premiere on the festival circuit, Consumption has been praised by critics. Famous Monsters described the feature as a “gruesome goulash of ghosts, cults and good ol’ demons”, and Starburst Magazine has given it a 9/10, calling it an “indie horror masterpiece”.

Synopsis: A group of friends travel to the snowy Utah mountains for a weekend retreat. One brings with him a dark secret that could destroy their lives forever. As they prepare to face an ancient secret buried in the woods outside their winter resort, an unstoppable evil begins to grow, consuming them one by one.

The DVD release of Consumption will include a feature length commentary with writer-director Brandon Scullion and a behind the scenes featurette.

The film stars Arielle Brachfeld (“Axeman of Cutter’s Creek”, “The Haunting of Whaley House”) – who won Best Actress at the R.I.P. Festival where the film premiered for her portrayal of the tortured Mallory – Chris Dorman (“8.13”), Sarah Greyson and David Lautman. The ensemble principal cast is supported by Nancy Wolfe (“Helter Skelter”, “Mark of the Witch”) and Maria Olsen (“Starry Eyes”, “Southbound”, “I Spit On Your Grave: Déjà Vu”).

You can enjoy the trailer here:
https://youtu.be/pXPhXbWcGGk

George Pavlou’s Little Devils: The Birth Spawns From Hell One Last Time via a Limited Re-release!

Survivorman’s Les Stroud Falls Into First Trailer for THE PIT