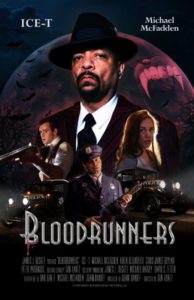 Speakeasy Pictures and IMPULSE-FX have released the first trailer for the period action thriller Bloodrunners. The latest feature from writer-director Dan Lantz (Blind Love, Felix Melman), Bloodrunners centers on a turf war between a crooked cop and a power-hungry vampire (Ice-T, “Law and Order: SVU”) over a small town soaked in illegal hooch during the height of Prohibition.

Bloodrunners is expected to premiere in 2017.