Where The Dead Go To Die, by Aaron Dries and Mark Allan Gunnells 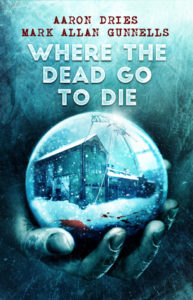 Where The Dead Go To Die – Book Synopsis:

There are monsters in this world. And they used to be us. Now it’s time to euthanize to survive in a hospice where Emily, a woman haunted by her past, only wants to do her job and be the best mother possible.

Inside The Hospice, Emily and her fellow nurses do their rounds. Here, men and women live out their final days in comfort, segregated from society, and are then humanely terminated before fate turns them into marrow-craving monsters known as ‘Smilers.’ Outside these imposing walls, rabid protesters swarm with signs, caught up in the heat of their hatred.

Emily, a woman haunted by her past, only wants to do her job and be the best mother possible. But in a world where mortality means nothing, where guns are drawn in fear and nobody seems safe anymore – at what cost will this pursuit come? And through it all, the soon to be dead remain silent, ever smiling. Such is their curse.

This emotional, political novel comes from two of horror’s freshest voices, and puts a new spin on an eternal topic: the undead. In the spirit of George A Romero meets Jack Ketchum, Where the Dead Go to Die it is an unforgettable epilogue to the zombie genre, one that will leave you shaken and questioning right from wrong…even when it’s the only right left.

It won’t be long before that snow-speckled ground will be salted by blood.