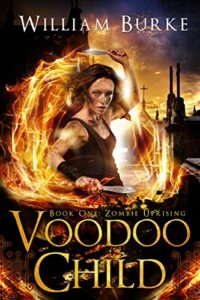 Voodoo Child, Book One: Zombie Uprising is the first novel in a new horror series packed with supernatural thrills, rousing adventure, dark humor, Voodoo lore and plenty of zombie stomping action. But a word of warning; don’t shoot these zombies in the head … because that just makes them mad!

It’s the legions of hell versus Maggie Child … and hell doesn’t have a prayer!

“With a great lead female protagonist, richly colorful set of secondary characters, plenty of roaring action, and an intense storyline that allows no boring moments, “Voodoo Child” is an intense, entertaining and memorable novel. Highly recommended.” Columbia Review of Books and Film.

Synopsis
Army chopper pilot Maggie Child has a reputation for being fearless, professional and, above all, rational. But when she’s shot down over Iraq her well-ordered life spirals into a paranormal nightmare. Alone, wounded and surrounded by hostile forces, Maggie is rescued from certain death by a demon straight out of Dante’s Inferno. Then, barely alive, she’s abducted by a private military corporation conducting insidious medical experiments. Her escape from their covert hellhole lands her on a Caribbean island where an evil voodoo spirit and a psychotic female dictator are conspiring to unleash an apocalyptic zombie plague. Then she uncovers the most terrifying secret of all—her own destiny. It seems a Voodoo oracle has ordained her the only warrior capable of saving humanity from a supernatural Armageddon … whether she wants the job or not!

But saving the world isn’t a one-woman job, so she teams up with a trio of unlikely heroes—a conspiracy obsessed marijuana smuggler, a Voodoo priestess with an appetite for reality television, and a burnt out ex-mercenary. Together, they’ll take on an army of the walking dead, with the fate of humanity resting in their eccentric hands.

Q&A – Did any horror movies inspire you to write Voodoo Child?
William Burke – ” Oh yeah, more so than books. I guess seeing the original
Night of the Living Dead on television as a child really put the fear of zombies in my head. I’m a huge fan of Romero particularly because he creates character driven films. The group dynamics in Night, Dawn, Day and Land of the Dead are what really drive them. I tried to capture that “tribal” feeling in my book by putting disparate characters together and letting them learn from each other and embrace their humanity.

For more information, go to http://www.williamburkeauthor.com/

After two years of ghostwriting, William Burke has released his first novel VOODOO CHILD, BOOK ONE: ZOMBIE UPRISING. It’s the first installment of a new horror series chronicling the exploits of Maggie Child and her Voodoo priestess partner Sarafina as they battle to save the island of Fantomas from the wrath of evil Voodoo spirits.

Marketing Macabre
Marketing Macabre is a brand new public relations / marketing / social media company that has been developed to help horror professionals. Unlike most internet marketing companies, our focus is very specific and designed to assist horror entities. Our goal is to promote your horror brand and take it to the next level. Whether you are a horror production company, a horror actor, a horror writer, a horror website, or a horror podcast – we will craft a campaign that will work for you and your brand. 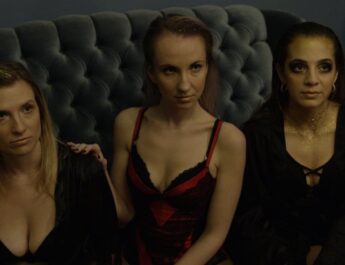