The Quiet Hour
“Time is Running Out” 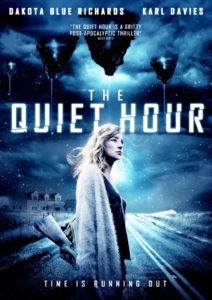 The film’s main story takes place in desperate times. Sarah must protect her blind brother and farm. Meanwhile, aliens are harvesting the planet for resources. When a mysterious soldier comes to her door, she must decide if she can let him in or not. Is he another bandit? With few survivors to turn to, Sarah must make a difficult choice, to ensure her family’s survival.

The Quiet Hour is slated to release this March. Monarch Home Entertainment will launch this title, via DVD, at several locations, including: Amazon. On March 21st, The Quiet Hour will be available in an unrated version. A remarkable film and winner of Best Narrative Feature at the Kansas City Filmfest, The Quiet Hour will stun science fiction and thriller fans, in just a few days.

Official synopsis: Humans are few and far between since Earth was invaded by extra-terrestrial machines that harvest the planet’s resources and relentlessly kill its inhabitants. In a remote part of the countryside, a feisty 19 year old girl, sets out on a desperate attempt to repel a group of bandits and defend her farm.