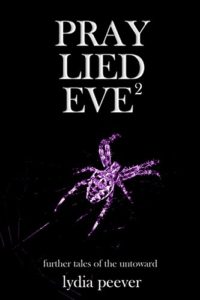 We recently had the pleasure of promoting ‘Pray Lied Eve 2’ by author Lydia Peever. After promoting her book, we wanted to give horror fans a chance to learn a little more about her books, and continuing involvement in the horror community. Here’s what she had to say about these things and more…

-PH: So let’s get right into it. Tell horror fans about your latest book ‘Pray Lied Eve 2.’ What’s it about and what can fans expect from it?

-Lydia: Much like the first installment, ‘Pray Lied Eve 2’ is a small collection of horror shorts written over the last year. While the first set of three stories were perhaps more dark, this book contains six stories that range from macabre Halloween stories, to very dark tales of revenge and even a personal account that comes from that grand place of pure fiction; nightmares. All six are very different, even though they all tackle some kind of madness. The seedlings of the madness can be found in all of us but that many people neglect to talk about.

-PH: Since it’s a series of different stories, is there one that’s your favorite, or stands out to you for some reason?

-Lydia: ‘As Is, Where Is,’ since it has a lot of firsts for me. It was the first story I brought to a writer’s workshop, it was the first story where I’ve tried to vaguely hommage a writer I adore the style of, and also the first story I wrote from concept to press after my mother died. None of it existed in notes before that. The subject matter alone, of the main character’s’ mother dying, points to that easily. All of my work contains threads of true stories or true happenings as little subplots and this one with all of it’s trinkets is stuffed with little bibs and baubles from my own past.

-PH: How challenging was it to come up with a series of stories rather than just one?

-Lydia: They all evolve over time. Some stories kick around in my head longer than others but there was certainly a point where I was worried the collection would be too short. Then the idea that the stories didn’t ‘go together’ or I would not be able to string one after another also came and went, but I did my best to squash that sort of thinking and just write. That’s all that matters in the end. It’s a different set of problems than a novel, so it’s nice to tackle a handful of unconnected plots and styles for a change. 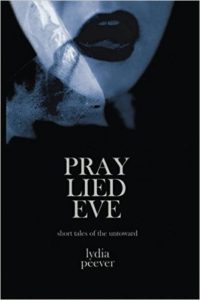 -PH: This is the sequel to ‘Pray Lied Eve.’ What’s the biggest difference between the two books?

-Lydia: I found the first ‘Pray Lied Eve’ darker in tone. While volume two is darker in subject a lot of the time, the tone is a little more lighthearted. Likely due to the inclusion of three different stories that take place on Halloween! That is the most noticeable difference. The unseen difference is that I wrote all of those stories within one year, and the first volume represents a couple of years worth of work.

-PH: Where did the name of the book come from?

-Lydia: It is certainly an anagram of my name. My favourite editor, Tobin Elliot was the first to notice although I have brought attention to it vaguely here and there. The sound of it, ‘Pray, lied Eve’ needs a comma and some quotations to give it a little more gravity, and to be honest I’m not even sure if the biblical Eve does direct us or anyone to pray, although after their exodus they apparently spent a lot of time doing just that.

-PH: Both books have gotten great reviews. How satisfying is it to know read these reviews and know all the hard work has paid off?

-Lydia: Very, in that I am very proud of both since there is so much of me in them. Being self-published, I really put my education in graphic design, photography, and journalism to task and presented the very best I could to the world. Not that I’m any less proud of work that is traditionally published, there is just a lot more of me at stake here. To know someone has read and enjoyed ‘Pray Lied Eve 2’ means the world to me. I get especially flattered if they admit the parts that scare them! Nothing quite like knowing there are bits I wrote that kept a person up at night or stayed with them for days or even years. Some writers say they don’t read reviews, but I do. Mostly so I can thank the reader if I can!

-PH: You’re very involved in horror besides your writing. Before we talk that, why horror? Where did your love of horror start?

-Lydia: As a child for sure. Growing up on a dark and misty farm and having a strange small town to poke around in helped. The biggest kickstart was having shelves upon shelves of books to pick through and being read to from the time I was too small to recall. Grimm’s fairy tales were my father’s favourite. Likely because he didn’t need to hold a book and could dip in and out of the newer plotlines and the traditional ones. He peppered in some of the older highlights that a lot of people find dreadful. My mother liked reading Poe to me and on certain rainy nights, it was ‘The Highwayman’ by Alfred Noyes. I can’t really recall having stories that were not dark in some way read to me either. Everything was horror. Even the films that my parents watched and talked about while I was at their knee turned out to be some really wild horror, which fed into my revisiting a lot of those as an adult. 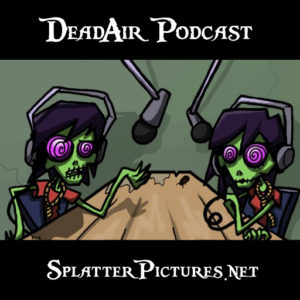 -PH: So you’re part of the Dead Air Podcast. Tell us a little about it, and how you got involved with it?

-Lydia: Wes and I met in Ottawa and not long after he invited me to start the show. There is a really wonderful genesis story on our 100th episode where we cover all four of the Blind Dead films, and relay a little nostalgia. I’d been writing and photographing for Ottawa Horror, a local website that chronicled horrific happenings in the area, and Wes was writing for Horrormovies.ca. Splatterpictures.net had been his repository for long form horror journalism so we both thought this would be some sort of journalistic endeavour. After a watching a film in theatre together and sitting out one night for a few pints, he realized we could both talk horror for hours. And not just shoot the breeze either. Really talk about it, and genuinely listen. Our table-mates settled in to listen and it seemed we just naturally ‘put on a show’ so in that way, half of our work is done. Now it just seems to be a matter of picking a film we both find something bigger or more interesting within, and try to rein in our conversation into some sort of regular format. We aren’t scripted, so sometimes run with our rambling, but have been told we do a fine job and don’t sound like a cookie-cutter show at all.

-PH: You get to talk about a lot of horror movies on the show. So what’s your favorite horror movie?

-Lydia: It is still Halloween 2. A lot of movies have come and gone, but that one I still keep on that pedestal. I think about Michael Myers a lot, and quirks of society that feed a character like that. Serial killers, the mentally ill, true crime, the justice system and how it interacts with healthcare; it is just a far bigger story to me than a typical slasher. At brass tacks, it is also a film I can put on absolutely any time and sit quietly from beginning to end and enjoy every minute as if it is my first watch.

-PH: Ever get any ideas for your stories from the podcast?

-Lydia: Perhaps! Due to the nature of horror and the regular request that we suspend disbelief in all manner of circumstance, we fell into wanting to conduct ‘Horror Experiments’. What that basically entails is proving or disproving things like ‘if you were in the van could you hear that conversation’ to ‘if you had that much intestine falling out, could you really make it that long and what would get you first, blood loss or shock’ or ‘how many kids can you fit in that steamer trunk?’ Pure silliness on one hand, but I’m sure all sorts of people watching scary movies have these logical thoughts even though we aren’t supposed to be trying to solve questions that weren’t asked, but just watch the darn movie! Some of these turned into short story ideas for sure. One involving an ice sculptor may well be the next short I tackle after I finish the novel I’m working on.

-Lydia: At this moment I am incredibly proud of us hitting 100 episodes of Dead Air, so that is my most important achievement this week! Coming up later in the year there will be a story published by ID Press, which will be a little bit of a departure from the horror genre proper, but still a dark story. That’s a proud piece for me as it was the first time I was included in an invite-only anthology. At the start of the year I had a reprint of a short story ‘Thicker Than’ published in ‘Memento Mori’. That is a massive reprint anthology from Digital Horror Fiction, where I was lucky enough to have my name grace the cover – another proud moment – which really fits as that story is one of my best. Since I’m writing the sequel to ‘Nightface’ and have it almost where I want it as far as final draft is concerned, the first novel is out there for those looking for a new vampire. Warlocks, half-breeds, alchemy, and my trying to fit modern vampires into that world was maybe a bigger challenge than I thought, but ‘Nightface’ does have a certain spell it casts. Strong enough magic to make me write a sequel! 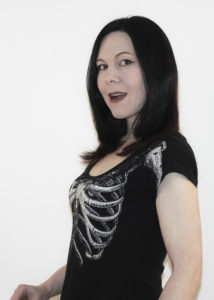 We would like to thank Lydia for taking the time to answer our questions. Hopefully you got to know a little more about her books, podcast, and her love for horror. You can find Pray Lied Eve 2 at https://www.amazon.com/dp/B01NB0YCD7
and more on her author page http://amazon.com/author/lydia. In case you missed it, you can view our promotion of ‘Pray Lied Eve 2’ here. We also encourage you to support her on Twitter, Facebook, Instagram, and check out her website at http://nightface.ca. 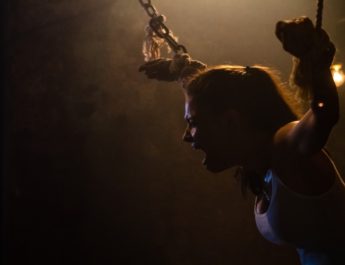 The Blackburn Asylum Opens Visiting Hours – in Canada – this December on VOD! 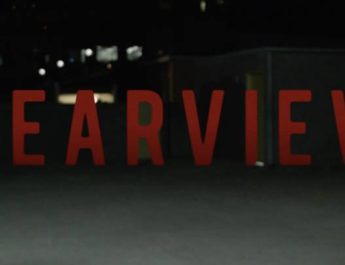