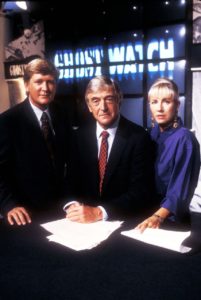 Shudder, the premium thriller, horror, and supernatural streaming service backed by AMC Networks, releases the BBC’s infamous faux-paranormal documentary Ghostwatch for the first time ever in the United States.

Produced as a part of the BBC anthology series Screen One, it was presented as a live television investigation of paranormal activity, not as a scripted TV movie. It was banned after the premiere as a result of disturbed viewers making an estimated 30,000 panicked calls to the BBC switchboard in a single hour. Ghostwatch was never re-aired on UK television, it never aired in the United States, and has never been made available on home video in the U.S.

The premiere of Ghostwatch on Shudder marks the second time in two months the streaming service has debuted a largely unseen piece of genre history for U.S. viewers; Shudder premiered Ken Russell’s controversial 1971 masterpiece The Devils in March, making it widely available for the first time in decades.

More information about the release…

Directed by Lesley Manning and written by Stephen Volk, Ghostwatch, is a documentary style on-air of a house in Northolt, Greater London that’s experiencing bizarre poltergeist activity. The recording of Ghostwatch was presented as live television causing a panic for viewers similar to “The War of the Worlds” in the United States.

About GHOSTWATCH’s release on Shudder:
-Has never aired in the United States, nor is it been made available on home video in the U.S.
-Aired once on BBC1, on Halloween night in 1992. Presented as live television and not a horror mockumentary, it resulted in an estimated 30,000 calls to the BBC switchboard in a single hour. It has never re-aired on UK television, and was banned in the UK until released on DVD by the British Film Institute in 2002.
-Features actual BBC personalities playing themselves, adding to the confusion for an unsuspecting audience.
-A clear precursor to The Blair Witch Project, Paranormal Activity and the found-footage genre
-Has a cult following: An annual event, known as National Séance, occurs every year on Halloween night at 9:25 PM (the original broadcast time of Ghostwatch), where fans are encouraged to hit play on their own personal copies of Ghostwatch and live tweet the special.

About Shudder
Shudder is a premium streaming video service, super-serving fans of thrillers, suspense, and horror. Backed by AMC Networks, Shudder has a growing and dynamic selection of thrilling premieres, originals, and exclusives, which complement its impressive library of international and independent films, gripping TV series, and Hollywood blockbuster favorites. Shudder streams ad-free in the US, Canada, UK, and Ireland on the web, iOS, Android, Chromecast, Apple TV, and Roku for $4.99/month or $49.99 with an annual membership. To try Shudder commitment-free for 7 days, visit www.shudder.com.

Nomination for “Attack of the Cat People”

Trailer and Poster for Vertical Entertainment’s “Behind You”

Supernatural Irish Horror BEYOND THE WOODS is Waiting 19 February