An ancient curse is unlocked in The Gatehouse, on VOD 12/5 from Uncork’d Entertainment.

Jack is a struggling writer recovering from the death of his wife. His daughter, 10-Year-Old Eternity, loves digging for treasure in the forest behind her house. In a coincidental turn of fate, Jack agrees to undertake a writing project about the ‘legend of the black flowers’ at the same time that Eternity discovers a mysterious object in the woods, and the forest wants it back. They’ve unlocked an ancient curse and must now fight for survival.

The film hails from award-winning director Martin Gooch, whose credits include many comedy shorts as well as films and series such as Death (2012), The Search For Simon (2015) and TV’s Hollyoaks. 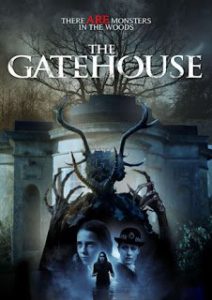 -PH: How many films have you done now? It must be quite a few now!

-Martin: I have just wrapped on my 4th feature film The sci-fi Post Apocalyptic Black Flowers which we shot in Mount Shasta North California and in Montana, USA in an actual Nuclear death cult bunker. Which was fun.

-PH: Have any of them been horror movies like this one?

My first film Death (AKA After Death in the USA) was a mystery, the second film The Search for Simon is a very dark Sci-Fi Comedy, so no.

I directed a short film called Eddie’s Sticky End which was a Film Noir Comedy Horror.

-PH: Do you like horror? What are some of your favorite movies?

-Martin: Well to be honest I’m more a fantasy and sci-fi fan than a pure horror fan. I do love horror films that are more supernatural, such as ghosts, werewolves, and the undead rather than a slasher film.

I loved American Werewolf in London and I saw The Fog when I was about 10 and it scared the hell out of me, but the best horror films are Alien and Jaws in my humble opinion. Dog Soldiers is brilliant and I did love some of the old Universal Monster movies like Frankenstein and Dracula. Anything in Black and White.

I was also very much influenced by A Company of Wolves, DragonSlayer and Labyrinth as a kid and then Monty Python and the work of Terry Gilliam especially.

-PH: And in terms of today’s horrors. Who gets it right?

-Martin: I know it’s not recent but I truly loved The Others, which is sort of horror and very gothic. Pan’s Labyrinth isn’t really a horror but is very horrific in places and that was very inspirational having a young girl in the lead role.

I really enjoyed The Woman in Black, which again is more a Gothic Horror than a Horror Horror, and horror aficionado Kate Shenton made the excellent Egomanic last year, which features a cameo by me, so it must be good!

-PH: Was this a huge break for you? Going out through a pretty major distribution in the US I see!

-Martin: Well we haven’t released the film yet – so let’s wait and see!

-PH: How did you find your cast?

-Martin: Some of the cast are regulars in my previous films, Linal Haft, Sarine Sofair I have worked with before. I’d known Melissa Knatchbull for a long time and she is super fun to work with, the leads Simeon Willis and Scarlett Rayner I hadn’t really worked with before, I had met Scarlett on my previous film The Search for Simon when she did an interview and I thought there is something special about this kid, so when I wrote The Gatehouse I wrote it for her – I never looked for a different actor, we always knew Scarlett was going to play Eternity.

Simeon is a friend of a friend and we just got on, and I thought he had great screen presence and I wanted to work with him, so we called him up.

-PH: Sure, it’s only a movie, but was it at all frightening shooting some of the scenes?

The Gatehouse was certainly spooky especially when it was night and we had pumped in all the smoke, and the horned god did look amazing in the night scenes with all the drifting mist around him, but to be honest I was too busy to be scared.

-PH: Where was the shoot? Location-wise…

-Martin: The Gatehouse is near a little village in Somerset where my Mum and Dad live. We shot 2/3rds of the movie there and then had to shoot the rest of the movie on weekends as Scarlett had to go to school!

-PH: Can you see yourself working in the genre again sometime soon?

-Martin: Absolutely – I have several other scripts already completed not least Werepig which is all about a girl who turns into a werepig – like a werewolf only a pig…

Ive just completed my 4th feature film The Sci-fi Post apocalyptic Black Flowers so I am deep into post in that and finishing it off.

Then we might be shooting the Sci-Fi Adventure Alice on Mars, which follows the further adventure of Alice of Wonderland fame and her exploits oif the red planet which should be a lot of fun, and maybe I’ll come back to gothic fantasy and horror after that.

Official Trailer and Poster for JIU JITSU – In Theaters, On Demand and Digital November 20th