-Izzy: At a very young age. I was drawn to old films I could see on cable, like the Vincent Price/Edgar Allan Poe/Roger Cormen films, Creature Double Feature pairings, and Hammer Horror flicks. I couldn’t get enough. I haven’t changed.

-Izzy: It was a gradual evolution. I went from devouring everything at my local video stores as a teen to programming genre stuff for film festivals and then reviewing films. I felt like I didn’t really belong, even then. But when I became a filmmaker, that changed. It was something I wanted to try, because apparently, I happen to be insane. But it caught, and here we are, 15 short films and bumpers later. I also write or co-write many of my scripts and I write fiction now, too. (Find me on Amazon in a few anthologies!)

-Izzy: It’s a spotlight and a celebration. I wish we lived in a world in which we didn’t need a spotlight and were judged by our merits, but we still have a long way to go where equality is concerned.

-Izzy: Great question. I’d say we’re vocal as hell and very active now, and I’m proud to be part of this wave of kickass women filmmakers!

-Izzy: More opportunities to work on features and be part of awesome projects, I hope!

-Izzy: Thanks! My PSA for the annual Women in Horror Month Blood Drive goes live at midnight, PST: https://youtu.be/8WzlpmdwHjo

Find me here:
Innsmouth on Shudder

The Lake Children in “Now I Lay Me Down To Sleep: A Charity Anthology Benefiting The Jimmy Fund” (Book also includes Jack Ketchum, Brian Keene, Christopher Golden, James A. Moore)

The Lake Children in “Hydrophobia: A Charity Anthology Benefiting Victims of Hurricane Harvey”

We would like to thank Izzy Lee for taking the time to answer our questions, but more importantly for her contribution to horror! 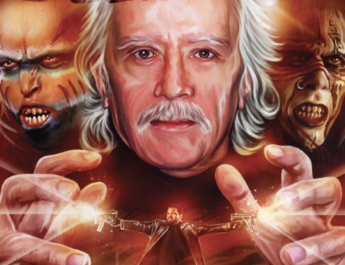