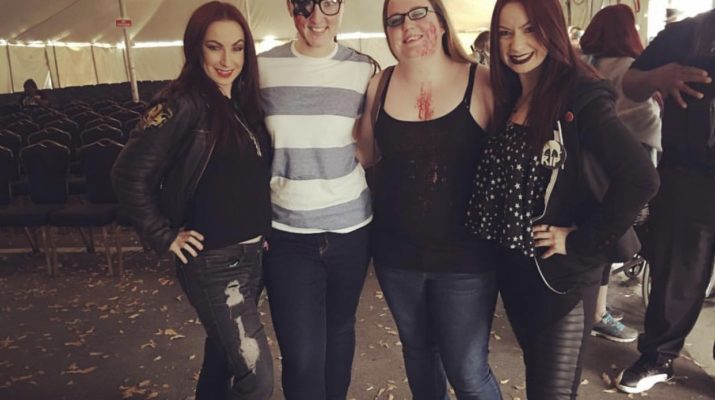 -Samantha: I fell in love with the “SAW” franchise when I was about 11, and it was even cooler because I felt like a rebel because I was supposed to be “too young” to watch it. But I think the “first” encounter I had with horror happened when I was three. There was a “Friday the 13th” marathon on TV and my mom just didn’t change the channel from whatever had been on before it. She thought I’d be scared of it, but I got so drawn into it! I was screaming, “You better run, girl!” at whoever Jason was chasing and laughing hysterically. Plus, my mom went into labor with me on a Friday the 13th, so I guess it’s all coming full-circle now.

-Kimberly: I avoided horror movies for most of my life. I was terrified of them. Then I was convinced to watch an episode of Hellevator. Watching this episode I started to see the technical side of filming horror and found it extremely amusing. From there I started watching movies like the Saw franchise and American Mary. I realized they terrify me less if I watch them and think about how they were created. I love watching horror movies and trying to figure out how they were made.

-Samantha: As crazy as it sounds, it never occurred to me that filmmaking involved such an array of people when I was younger. You see the finished product, but as a kid, you never think about the writers and directors and designers and editors and cinematographers behind the work. My first “contribution” came in the form of a contest by the Soska sisters, celebrating the fourth anniversary of American Mary’s release. I guess that was the transition between being a fan and making something of our own, since the contest was specifically for the film’s fans. I still have the notebook full of shot lists and costume requirements and to-do lists from that project. My inner Type-A fell in love with making decisions and being in charge of what shots we got, where to film, and how to put it all together.

-Kimberly: I think working on the American Mary Swede contest awakened my passion for making films. I loved coming up with ideas and figuring out how to create fake blood. I love thinking of new ways to terrify someone and wondering how my ideas will come through on a screen.

-Samantha: It means we still have a long way to go as far as a balance between the sexes in the world of film, but at least for one month, we can spotlight the women of the genre whose work deserves substantially more recognition. It means that young women like me and even young girls get to see brilliant, powerful, competent women do jobs that prove we aren’t just gorgeous set pieces that belong only in front of the camera.

-Samantha: If it were not for Jen and Sylvia Soska, I wouldn’t know nearly as much about filmmaking or the horror genre as a whole. Their female roles are insanely strong and well-written. Their willingness to build other people up and offer any knowledge they have makes the world of film a much more welcoming and attainable place. They work tirelessly to shatter stereotypes of women in the genre, especially behind the camera, and to prove that, in their words, “filmmaking is not an elitist art.” They are incredibly open and kind to their fans and other artists. They use their positions to kickstart much-needed changes. Simply put, they are excellent people doing excellent work.

-Kimberly: Jen and Sylvia Soska are huge role models to me. I would never have gotten into horror without seeing their work and watching how much fun they had working on their game show. I think their films are inspiring. Their characters are well written and I truly feel like they are trying to make a change to how women are viewed in the film industry.

-Samantha: On screen, women are no longer just the helpless damsels in distress. Look at the “Scream” and “SAW” franchises. Female characters are often much more fierce, intelligent, and tenacious than their male counterparts—hence the “final girl” archetype. Behind the camera, there’s more work to be done in increasing the opportunities that women receive, but I feel like I’m living in a revolutionary time for women in the industry. More so than ever, we are unafraid to say what we want, to go after the jobs we want, and to make noise about the things that matter.

-Kimberly: Women are becoming less of a damsel in distress. We are seeing less of the women being used just to be visually pleasing and watching them become the heroes that young women who love the genre need to see.

-Samantha: I hope to see a day (hopefully in the not-so-distant future) that we no longer specify “female director,” “female writer,” or “female-driven story.” Not because they won’t exist, but because they will be as common and as valid as their male equivalents. I think there will be a day when women are not hired as a token, or because it’s a “woman’s story,” but because their body of work is meaningful and thought-provoking and pivotal in the genre’s development.

-Kimberly: I hope that in the future the number of women in horror continues to grow. I think that we will see a day where their contributions are recognized by a wider number of people and by Hollywood. 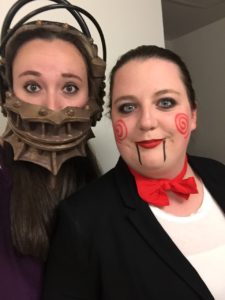 -Samantha & Kimberly: This year, we were honored to contribute to the Massive Blood Drive PSAs with our piece, “Party Prick.” We also released an independent PSA, which was planned just before we were invited to the Massive Blood Drive PSAs. Check out “Cooking with Corpses” on YouTube! Also, be on the lookout for the thriller short we have development at the moment (working title “The Lover”) that we plan to film and release this year!

We would like to thank Samantha Hawkins and Kimberly Pipkin for taking the time to answer our questions, but more importantly for her contribution to horror!