In Bus Party to Hell, A party bus en route to Burning Man breaks down in the middle of the desert among a satanic cult. A massacre leaves survivors trapped on the bus, fighting for their lives and panicked that someone is not what he seems.

We speak to Richard Hochman, who plays Alan in the film, about his love of horror, working with Tara Reid, and shooting in Nevada.

-Richard: Alan Armstrong is a thrill seeker as heart. He’s an entitled rich kid who never had to work for anything, so he needs to have exhilaration to feel anything at all. Total adrenaline and experience junkie.

-PH: And how does he factor into the ‘Bus Party’?

-Richard: When things start to go to hell, pun intended, he takes on a leadership role immediately, maybe quietly enjoying all the mayhem going on, while ultimately wanting to survive.

-PH: How much of you is there in the character?

-Richard: Alan has a lot of sarcasm, albeit mean spirited sarcasm. I have a pretty dry sense of humor, and I put a lot of that aspect of myself into the role.

-PH: One of the most often asked questions I imagine you get is ‘what’s Tara Reid like to work with?’

-Richard: Tara is a pro. She’s been around the industry for a long time, she showed up on time, wasn’t a diva, and very friendly to the cast and the crew. 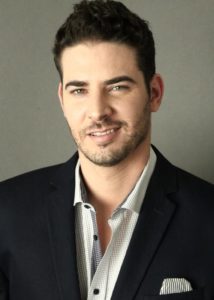 -PH: Were you a big horror fan as a kid?

-Richard: I was but I was also a wuss. I loved Scream, Evil Dead, Chuckie, The Ring, Event Horizon, but I was always genuinely scared, which at the time I wouldn’t admit, but now I’m not ashamed! I loved them because they made me jump.

-PH: How empowered did you feel playing the part? It’s a cool part!

-Richard: My character is an alpha by nature, so of course it was empowering, there’s a scene where I’m delivering a re-assuring speech to most of the main cast, and it’s and exciting moment as an actor.

-PH: Some of those locations you shot at looked pretty cool too. Where did you largely shoot?

-Richard: We shot about 50 miles outside of Las Vegas in a national park. It was beautiful, especially at sunset, and gave the eerie feeling the film needed as well.

-Richard: Rolfe has directed something like 28 movies, which is astounding. When I went to set, I knew I could just focus on my performance because he had everything so well planned out. Every shot, every angle, every nuance on the delivery of certain lines, he was on top of it. It was a pleasure.