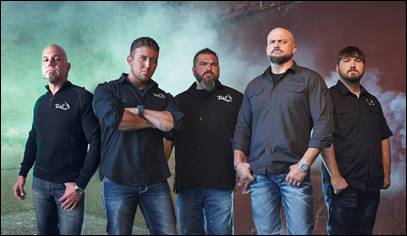 Top Secret Haunted Locations to Be Unveiled Each Week

Calling all ghost hunters! Get ready for a thrilling, suspenseful and interactive paranormal investigation series where viewers can help drive the course of the live show in real time. Travel Channel’s “Haunted Live” premieres on Friday, September 14 at 10 p.m. ET/PT, and invites ghost lovers to join a live paranormal investigation alongside the Tennessee Wraith Chasers, a team of paranormal experts that relies on a combination of scientific method and spiritual faith to navigate its investigations.

Each week, the team – comprised of Chris Smith, Steven “Doogie” McDougal, Scott Porter, Brannon Smith and Mike Goncalves – will reveal a new haunted location to the public, keeping it under wraps until the investigation begins to avoid interference or contamination. Then, team members utilize their skills, technology and unique experiments to capture evidence of paranormal activity in a live and unfiltered paranormal investigation. Through an on-location live video stream, viewers can monitor all of the “Haunted Live” activity on Travel Channel’s Facebook Live platform and comment on any findings in real time, directing the team where to investigate next. Fans can follow Travel Channel’s social media pages for the location reveal each week, and visit Facebook to join a special pre-hunt Q&A with the Tennessee Wraith Chasers. Visit TravelChannel.com and #HauntedLive for additional content and exclusive updates.

“This is going to be the ultimate paranormal experience,” said Chris Smith, founder, Tennessee Wraith Chasers. “It’s like nothing that’s ever been done before in this field and on this level. We have such a loyal and passionate fan base. With their eyes and ears added to each investigation, there’s no telling what we could uncover. Board the Wraith Train, strap in tight and enjoy the ride.”

“We try to dig deep into the paranormal, seeking out the unknown mysteries to the other side,” added Steven “Doogie” McDougal, co-founder, Tennessee Wraith Chasers. “This show takes our skills to the next level as all of Wraith Nation will be on the hunt alongside the TWC. All those extra eyes peering into the paranormal realm, I think we’ll have the upper hand and those spirits will have no place to hide.”

ABOUT THE TENNESSEE WRAITH CHASERS
The Tennessee Wraith Chasers (TWC) is a serious team of paranormal investigators that doesn’t take itself too seriously. Each investigation is packed full of Southern charm and wit, but when it comes down to business, TWC doesn’t mess around. TWC’s motto is respect, detect, collect, meaning they rely on a unique combination of scientific method and spiritual faith to navigate investigations. Growing up in a historic, and some say haunted, area of Tennessee has given the team an authentic desire to make sense of the mysterious things they’ve experienced through paranormal research. They take great pride in establishing trusted relationships with witnesses and call on the strengths of each team member to leave no stone unturned. The Wraith Chasers made their television debut as the stars of Destination America’s fan-favorite series “Ghost Asylum,” in which they investigated America’s most frightening asylums, sanitariums, penitentiaries and haunted hotspots.

ABOUT TRAVEL CHANNEL
For virtual and active travelers who want to go on a thrilling quest; taste other cultures; enjoy the mystery of the unexplored; get a dose of epic adventure; there is no better daily escape than Travel Channel. Reaching more than 82 million U.S. cable homes, Travel Channel is the world’s leading travel media brand. Fans also can visit Travel Channel for more information or interact with other fans through Facebook, Twitter, Pinterest and Instagram. Travel Channel is owned by Discovery, Inc., a global leader in real life entertainment whose portfolio also includes Discovery Channel, HGTV, Food Network, TLC, Investigation Discovery and OWN: Oprah Winfrey Network. Jump Back Into THE TOMORROW WAR With New 9B Collective Poster