Art of the Dead movie cast and crew private screening takes place on Tuesday, January 22, 2018 at the Ahrya Fine Arts Theatre in Beverly Hills, California from 4-7 pm PT. Tickets available at eventbrite get yours today!

After purchasing seven paintings for his estate, Dylan Wilson (Lukas Hassel: The Black Room) has no idea what hellish temptation he has just brought into his home. Originating from a dark pact made between evil entities and the artists of the deadly paintings, each work of art represents one of the seven deadly sins. As mysterious, dark forces begin to emerge from each painting to threaten the lives of the Wilson family, it is up to Father Mendale (Robert Donavan: The Black Room) to free them from this unholy biblical curse.

The Art of the Dead movie cast and crew private screening takes place on Tuesday January 22nd at Ahrya Fine Arts Theatre in Beverly Hills. The red carpet will begin at 4:00 p.m. and the movie will start promptly at 5:15 p.m. The venue seats 425 people. 200 tickets are for sale to the public and the rest are reserved for cast and crew. Tara Reid and Richard Grieco should be in attendance with the majority of our cast and crew.

Get your tickets for the Art of the Dead cast and crew private screening at eventbrite here:

Watch the Art of the Dead movie trailer: 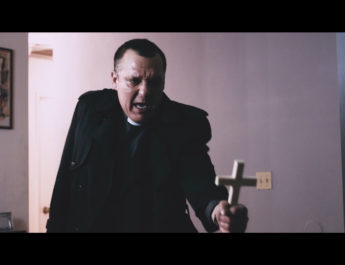 Tom Sizemore Vs Unspeakable Horror in THE PINING