Steve Greene (of the band Voyag3r) has another solo album coming out on Friday, March 15, 2019 entitled Distant Transmissions – Kona, Hawaii. Steve’s debut solo album, entitled Electronic Dreams For a Holographic Existence, which was released in January 2018, received Rue Morgue Magazines ‘Album of the Year’ accolade for 2018.

Greene travels to a remote location and sets up a minimal synth and recording rig. In the case of the Kona, Hawaii sessions, 2 small synthesizers (Arturia MicroBrure and Dave Smith Instruments Tetra) one delay pedal (Earthquaker Devices Afterneath), a handheld digital recorder for open air recording and a D.A.W. No pre-planning or writing is done ahead of time, Greene specifically uses the unique and exotic environment to inspire the composition(s).

Never knowing how much material will be created, the releases will vary in length and song count. Distant Transmissions – Kona, Hawaii has 6 tracks, coming in at 30 minutes of music, meets soundscape, meets movie score vibes. 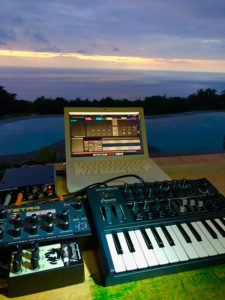 Track Listing:
1. Through The Gateway
2. A Fog Engulfs The Coast
3. Blue Skies, Black Rocks
4. Lights In The Sky
5. The Source Of The Lights
6. Island Ambience

Distant Transmissions – Kona, Hawaii is set for release on Friday, March 15, 2019 via Battle Chamber Music on cassette and all digital and streaming services and later this year on vinyl via Bellyache Records.

More information as it becomes available at http://battlechamber.com

Soska Sisters’ WiHMX Massive Blood Drive PSA – Give It Away