New comic book mini-series from Comics Experience and Source Point Press on sale April 2019!
Comics Experience and Source Point Press are excited to announce that their new four-issue comic book miniseries, Achilles Inc., goes on sale at retailers across the world on April 24th! Achilles Inc. explores what happens when the people who get superpowers don’t put them to good use. With writing by Andy Schmidt and art by Daniel Maine, Francesca Zambon, and Marco Della Verde, Achilles Inc. delves into a world where superpowered people have used their abilities for personal gain, exploiting humanity and tanking the world economy — unemployment runs high and hopes run low for the world’s disenfranchised.

In the midst of this crisis, Ransom Yeong, an ex-cop, steps right into the middle of a class war between the “Boosters” and the “Duds.” But he’s not alone in his crusade as he finds Kyra, a talented attorney, Mishy, his sharp-tongued administrative assistant and Dani, a booster with electricity-control abilities, all of whom feel powerless in the new world order. Together, they craft a plan to take advantage of their oppressors’ weaknesses and restore freedom to the world.

“Achilles Inc. is a special book for me because it’s my first return to super-powered characters since leaving Marvel editorial,” said Schmidt, an accomplished writer and founder of Comics Experience. “I’ve never lost my love of super heroes, but I see a new metaphor in them today than I did when I related to the X-Men and Doom Patrol as an adolescent.” Andy brings his years of experience from Marvel Comics editorial, where his work on Annihilation relaunched The Guardians of the Galaxy and redefined those characters for years to come. “I have to say, it’s fun to play in a sandbox where just about anything can happen again.”

“Working on Achilles Inc. was really fun,” said Daniel Maine, the artist on the series. “I think the idea of this world, with the Boosters and our heroes, is really interesting, with a lot of possibilities! I cannot wait for people to enjoy our work.”

All four issues of Achilles Inc. are available via Diamond’s Previews catalog from Source Point Press — order code FEB191968 — and the first issue of four will be available at retail on April 24th. It is also available at Source Point’s convention appearances and their online store, as well as digitally on comiXology. The Final Order Cut Off Date (FOC) is February 18th.

Andy Schmidt is available for interviews at Andy@comicsexperience.com and a pdf of all four issues of the mini-series is available upon request for review and interview purposes.

The publishing partnership between Comics Experience and Source Point Press gives alumni from Comics Experience’s Creators Workshop, education courses, and mentorships the opportunity to have their comics published and distributed. The publishing program was announced in January 2018 and immediately followed with four titles published in April and four more in October of the same year. Achilles Inc. is the first title to launch in 2019, with more to be announced shortly.

COMICS EXPERIENCE is an educational company dedicated to teaching the craft of creating comics — from writing a script, to laying out a page, to marketing a finished product, and every step in between. Founded in 2007 by former Marvel Comics editor Andy Schmidt, Comics Experience helps develop new talent through its online community, the Creators Workshop, as well as through discipline-focused courses, master seminars, and mentorship programs taught by professionals in the comic book industry. The goal of Comics Experience is to provide students with the skills and education they need to work in the comic book industry. Comics Experience also operates a publishing program, bringing some of its students’ work into print and digital distribution in partnership with Source Point Press and comiXology. Follow Comics Experience on Twitter @ComicExperience. For more information about Comics Experience, visit www.ComicsExperience.com.

SOURCE POINT PRESS is a Michigan-based independent comics publisher, specializing in the horror, sci-fi, pulp, true crime, occult, and supernatural genres. With a catalog of over 50 titles and an exceptional commitment to building reader-publisher relationships, SPP attends over 50 shows annually. For more information about Source Point Press, visit www.sourcepointpress.com. 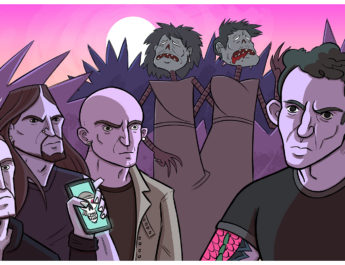