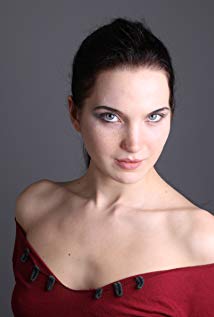 -Rahel: I started watching horror films at an early age. I must have been about only 5 or 6 years old when I first saw ‘The Shining’ and loved it. Also saw the first ‘Child’s Play’ movie when it was played on a kids channel in Greece! But my real love for horror goes back to Troma when I rented’ Class of Nuke Em High’ from the video store.

-Rahel: I got my first taste of being both behind the scenes and in front of the camera
when my brother Salem Kapsaski directed his first horror short film ‘My Head Hurts’. I got to play a small role in it but also worked on the FX and makeup. While I was covering our staircases in the fake blood I made, I realized yeah, that’s what I want to do!

-Rahel: I love the “Women in Horror” month! It makes you proud to call yourself a Scream Queen.
It is the perfect celebration of all the Scream Queens and female horror creators.

-Rahel: Everyone says things are improving for women in Horror and in a way it is. It’s good to see that there are many more women horror film makers emerging but I think there were many more great female characters in the 70’s and 80’s. I would like to see stronger female on screen characters, a lot of the characters you see in films are very one dimensional and cliched.

-Rahel: The independent film scene is lacking good female characters a lot of times and I don’t expect much from Hollywood. Surprisingly though we have seen a lot of good female characters in television within the Horror genre. From strong young characters such as Eleven in ‘Stranger Things’, to mature ones such as Jessica Lane’s characters in ‘American Horror Story’, queer women such Freya in ‘The Originals’ and Suzie in ‘The Chilling Adventures of Sabrina’. Unless independent filmmakers step up their game, the future of women in Horror is in television.

-Rahel: I would love to someday direct a horror film myself featuring a female serial killer.

-Rahel: Sasha Grey in ‘Final Cut’ and Sadie in ‘The Last House on the Left’. (Writing that I just realized both these films have David Hess in them….

-Rahel: You can get your copy of Salem Kapsaski’s Horror Musical ‘Spidarlings’ which is out by Troma. Also made by a largely female crew. With Gabriella Kapsaski as executive producer and cinematography by Sandra Samaca. It also has queer characters and themes, and features a realistic modern lesbian couple and an empowered trans character in Jeff Kristian’s The Diva. It also has Lloyd Kaufman in it so get in now at http://www.troma.com.

Also have two films coming out this year that I star in by Northbanks Productions. One is ‘Bundy and the Green River Killer’ in which I play Julie and will be released on April 9th. I also star as Russian spy Olga in the 5th installment of Andrew Jones’ iconic Robert the Doll series ‘Robert Reborn’ to be released in June

We would like to thank Rahel Kapsaski for taking the time to answer our questions, but more importantly for her contribution to horror!