Zenobia Grant – Doctor, Daughter, Lover, Warrior. And Not Quite Human…

Zen has been trained from birth to defend herself against a terrible threat. And to be careful to not injure the fragile humans that surround her. She uses her skills to heal, not harm, and to keep the questions that haunt her at bay.

Zen doesn’t know what she really is or what happened to her mother. But the answers will put her in the crosshairs of some of the most powerful and malevolent beings in existence. Djinn, dhampyrs, and vampires all stalk Zen for their own reasons.

Visions inspired by an ancient book lead her to discoveries. Not only of who and what she is, but it identifies the creatures who attack her and her family. What it doesn’t tell her is how to defeat them before any more loved ones are destroyed.

Set against the rich tapestries of the ancient world and present day, Progenie is an epic journey of self-discovery, love, and betrayal. 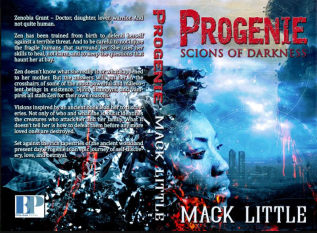 Mack Little’s Progenie is an epic horror novel. It features a beautiful doctor who tries to discover not only who she is, but what she is. Her only clue? She’s not quite human.

Progenie provides a rich tapestry of characters set in present-day Texas and Louisiana, as well as in the ancient world of kings and prophets.

Featuring a woman of color as the main character, Little brings a new voice to horror, one infused with the richness of her poetic prose and the sweeping canvas of her locations.

“I was pulled into Zen’s uniqueness immediately. I watched the child try to be human, all the while knowing she was more, and yearned with her as she came of age to know what she was. Little has a great talent for character development. You will hate certain characters and then find you like or even love them. Little brings her characters to life from her extensive research of other countries, cultures and religions. You will love Zen. You will pull for Zen to find out what she is besides doctor, daughter, lover, fighter. Mack Little has created one dazzling package in Zen! For a debut novel Little’s Progenie (Scions of Darkness) reads like a skilled, experienced work.”

“Past melds with present and fantasy with reality in PROGENIE, a richly imagined debut fantasy horror novel by Mack Little. With prose gritty at times, lyrical at others, and vivid, unique characters, PROGENIE will appeal to fans of Anne Rice and Cormac McCarthy alike. Kudos to Little–looking forward to the next Scions of Darkness novel.” ~ Pamela Fagan Hutchins, USA Today bestselling author of LIVE WIRE from her What Doesn’t Kill You mystery series.

“Zen is one of the most unique protagonists you will ever encounter. We meet her fresh off a broken romance with a fellow medical student. We learn that she has special powers, physical, intellectual, and spiritual, and that she is human in many ways, and yet in so many others, she is something beyond human. She knows this and wants an answer to the question that burns inside her: What am I? The story of her origin spans scores of centuries, from antiquity to the present, and sprawls across the globe from the Middle East to Paris to New Orleans and Houston. A breathtaking array of creatures know or want to know her essence – characters from the Bible and the Quran, fallen angels, djinns, dhampyrs, Scions (a form of vampire), and more. Meticulously researched, creative beyond words, packed with romance, passion, jealousy, and violence, Progenie is the mesmerizing story of Zen’s search for her destiny.” – Ken Oder, IPPY 2015 Bronze winner, author of the Whippoorwill Hollow series

“This urban fantasy melds an ancient world with the present, creating a protagonist that is as mysterious as she is real. Mack Little leads readers into the psyche of an extraordinary character and the progression in character development is so steady and skillfully crafted that it leaves readers feeling as though they had grown up with the protagonist. The pacing is just right — neither too fast nor too slow — but what sustains the reader’s interest is the depth of character and the deft plotting. The prose is beautiful. It is punctuated with powerful streams of consciousness, exciting dialogues, and descriptions that give life to strong moments in the narrative. Progenie offers a lot of entertainment, especially to fans of urban fantasy and readers looking for supernatural narratives with intriguing twists.” – Readers’ Favorite Five Star Review 2019

“A fascinating leap into a tangled world of supernatural creatures that spans continents, centuries and dimensions. Are you a fantasy and horror fan? Like a story with menacing characters? Vampires? Demons? A hybrid of the two? All completely believable filled with very human flaws and virtues? You’ve never met monsters like these. Mack Little brings them all to life on page after story twisting page. Zen knows she isn’t human, although she looks like a beautiful one, but she doesn’t know what she is. What she does know, innately, is that something is hunting her. Follow her on the path of self-discovery and learn how the world and all its creatures came to be in flowing, beautiful prose that paint each scene masterfully. A one-of-a-kind story that will not let you go. I highly recommend this book to any horror or fantasy aficionado in search of something fresh and new.” – Darrell Lee, author of The Gravitational Leap

No matter what kind of horror fan you are, it’s time to get your copy of this 5 star book today at:

Mack Little is full of wanderlust. And what better way to find inspiration than visiting as many locations in her series as she can. Born in Conyers, GA, Mack lived in Seville, Spain while a student. As a soldier, she was stationed in Wurzburg, Germany. Her studies and career have taken her all over the United States, and she has taken jaunts across the pond. Mack is currently the Membership Director of the Houston Writer’s Guild. Progenie is her first novel, and she co-authored Disaster Planning: A How-to-Do-It Manual, published by Neal Schuman. She has also authored several articles for professional library journals. Mack holds an undergraduate degree in English Literature as well as a Masters of Information Science. She now resides in Houston, Texas with her husband and a playful papillon. 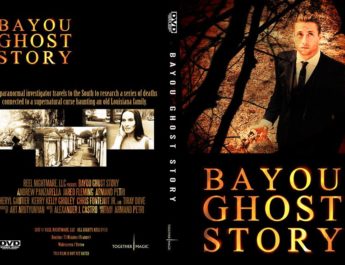