“Osgood As Gone is a page turning combination of twisting mystery, otherworldly scares and captivating characters. It’s one you’ll keep thinking about long after you put it down.”

“A phenomenal book! It’s CreepyPasta by way of Stephen King and sticks the landing on LGBT+ characters. Creepy, funny, clever, and captivating. You’ll love this!”

“Osgood as Gone is a blend of supernatural detective story, cosmic horror and dark humor that is impossible to put down. With a main character who will steal your heart as fast as her backstory will break it. She’s flawed and broken but unapologetically human throughout the twisted path she travels towards a horrifying truth that only a badass like her could confront. Loved every page.” 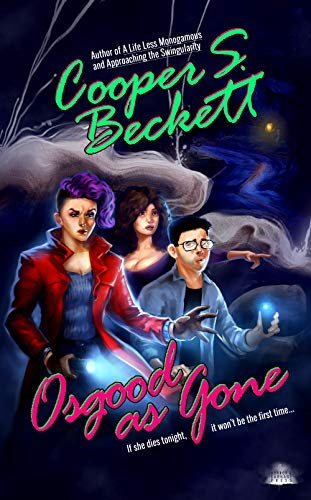 “Dark, ethereal forces. Spooky highway rest stops. Cryptic emails. Hidden messages in secret backwards grooves of old records. Osgood As Gone combines classic and contemporary horror elements with a sensitive and moving exploration of the vulnerability and self-awareness of maintaining and rebuilding relationships after personal trauma. Beckett weaves threads of hard-boiled stoicism, endearing and grounded humor, and truly relatable physical and emotional damage into a narrative that engages on multiple levels and keeps the pages turning all the way to its unexpected but fitting climax.”

“A surprising gem of a novel, if you love horror/mystery/suspense. Cooper S. Beckett has created a relatable protagonist in Prudence Osgood, a late-thirties queer woman who is refreshingly and unapologetically flawed. You’ll be surprised by how everything fits together.”

“A hard-boiled detective thriller by way of Lovecraft (or perhaps the other way around?), Osgood as Gone delivers winding mystery and pit-drop unease in equal measure. Prudence Osgood is as tortured as she is clever, and to see this genre through the eyes of a queer female protagonist is a delight.”

Once, Osgood and Frost were the up-and-coming stars of the burgeoning paranormal investigation TV show craze before a hoax put an end to their friendship, partnership, and television careers. Now, over a decade later, Prudence Osgood is a barely-functioning alcoholic ghosthunter for hire. Her yearning for mystery and adventure is reignited when she receives a cryptic, untraceable email. She can’t resist embarking on an investigation that tugs threads winding through a sinister series of disappearances, her former partner’s family, and a night twenty years ago when a semi blew a yellow light and nearly killed her.

Don’t wait…be the next to give this book a 5 star review after getting your copy at:

More about the Book

In a recent interview, author Cooper S. Beckett talks about where the idea for his book came from…

“This book had a long road to publication. Inspired by urban legends and the Beatles’ “Paul is Dead” phenomena, I conceived of a missing teenagers story to be told in fake documentary form à la The Blair Witch (it was 1999 at the time…). That didn’t come to fruition, and in college I started writing about a ghost hunter based on Gregory McDonald’s Fletch, a caddish antihero, flippant with all, and a Lothario with the ladies. Four times I tried to develop this story with him at the center, once as a TV series, once as a screenplay, and twice as a novel. Then I put him and this story away, and focused on other things, leading to my first three books.

When I wanted to return to horror, I realized that I was no longer interested in the cis-hetero-male antihero archetype (which, let’s be honest, has been WAY played out ever since Tony Soprano) and, as an exercise, started brainstorming a similar character, but female and queer. Thus Prudence Osgood was born. Initially I planned to rewrite my earlier stories with this new protagonist, but I quickly became bored with treading old ground. Then, while watching a documentary about the ominous Toynbee Tiles, my hook snapped into focus. Just over a month later I’d finished my first draft of Osgood As Gone.”

As a queer non-monogamous writer, Cooper S. Beckett endeavors to create characters that reflect the diverse lifestyles of his friends, his partners, and himself. From that mandate, he writes scary, silly, and sexy books and essays. Beginning his writing career as a podcaster and speaker in the sexuality education community, he wrote My Life on the Swingset, a memoir of his first five years in non-monogamy, then followed that up with two novels that take a brutally honest look at swinging and polyamory, A Life Less Monogamous, and Approaching the Swingularity. Returning to his first love, the horror genre, has been like a homecoming. From a young age, his obsession with horror movies and books seriously concerned his mother. It probably still does. Given a choice, he would rather winter at the Overlook than the Waldorf. Like Lydia Deetz, he has always thought of himself strange and unusual, be it his perspective on sexuality, monogamy, politics, or where Elder Gods ought to fall in the hierarchy. 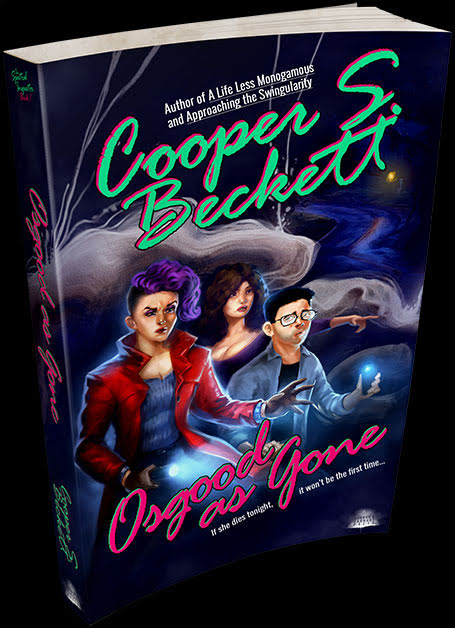 -Find out more about Prudence Osgood