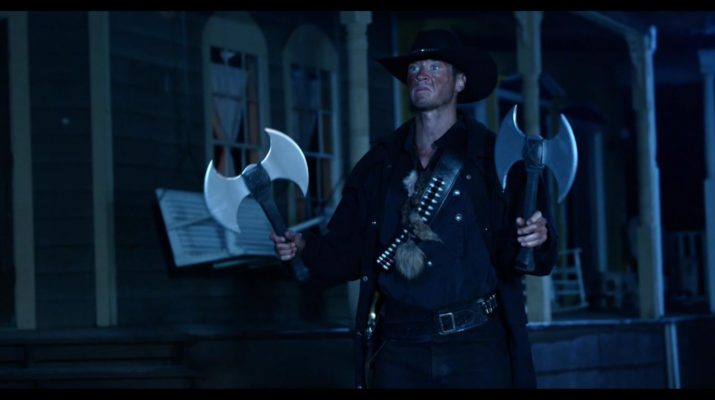 Here are some of the horror DVD/Blu-Ray releases for July 2nd!

Merricat and Constance Blackwood live with their Uncle Julian in a stately manor. They are ostracized by the local villagers who feel the Blackwoods are a blight on the community. The three are the only survivors of an arsenic poisoning that killed everyone else in the family five years prior. Now, Constance remains in the house, afraid to face the outside world and the persecution she suffered as a suspect for murder. Merricat is bold, imaginative and wise beyond her years. Merricat dares to venture into town regardless of public opinion, and protects the vast family property with a series of totems, charms and incantations. Despite being hated and feared by the townspeople around them, the two sisters and their uncle live a somewhat idyllic life – that is until Charles, a family cousin, arrives. Charles offers to help the sisters manage the house, but he also inquiries about the family s financial affairs and interferes in Merricat s daily routine. As Constance grows closer in confidence and friendship with Charles, Merricat resists this demon that has violated their perfect world. As Charles and Merricat battle for control, tragedy threatens to strike again, and the fate of the house and the family legacy hangs in the balance. Part murder mystery, and part haunted house, CASTLE is an adaptation of the classic 1962 novel by Shirley Jackson.

Ernie and Rose are two widower WWII veterans with no one but each other, living in a crumbling old house outside of Baltimore. Wade is a youthful, blue collar laborer with a wife and young child. Their lives seem predetermined to never intersect, until Wade’s wife is savagely assaulted and, in a fit of anger, Wade accidentally kills her attacker, subsequently finding himself convicted of murder and sentenced to death.

Jake (James Raftery) is an apathetic, post-punk vampire who spends his nights cruising seedy music dives for drugged out women to seduce and kill to satisfy his bloodlust. After murdering Zohra, a young Puerto Rican woman, Jake becomes the focus of her brother, Angel, who’s desperate to find his missing sister and fears that Jake might be involved in her disappearance…

Survivors of previous shark attacks are hunted by a supernatural shark in their dreams.

Charlie’s getting married. And when he invites his friends to join him for a stag weekend in a remote British cabin, the group thinks it’s a great opportunity to leave the US behind and have a blow out with their old buddy – Only thing is, Charlie isn’t telling his friends the whole truth about the trip. Instead of celebrating, events soon take a sinister turn when the friends start to disappear one by one. Is Charlie up to his old tricks? Or has some dark demonic force really been unleashed into the woods? Soon the American friends start to learn the true reason why Charlie has invited them to a creepy cabin in the woods, in the middle of nowhere, and the fight for survival is on.

In 1951 USSR, infamous killer doll Robert battles Stalin’s henchmen on board a plane.

Mara Madigan is a pregnant police officer about to go on maternity leave. But on her last day on the job, she wakes up to a world ravaged by a nightmarish and bloody plague of the living dead. Amidst the chaos and violence, she finds Ben Neilson, a man who is virtually blind, helpless, and has a mystery shrouding his past. Somehow these two must put their heads together and find a way to safety to escape this living hell.

Taurus City, The United States of Europe, 2023. Uly, a disillusioned soldier riddled with amnesia, returns home from a war in the Middle East, knowing only that he must desperately comb the city to find his beloved wife, Penelope. Fate fills this endless night with a series of chance meetings. Whether it be the wealthy Alcyde, the beastly cyclops Popov, Aeo the Gyspy, or Cici the Sorceress, good or evil that they be, each encounter fills in a missing piece of Uly’s memory, so that he can finally face his past.