As summer heats up, we’re here to give you even more reasons to stay inside, with the AC turned up and the lights turned down. Reason one: NOS4A2, AMC’s hit horror series comes to Shudder. Reasons two and three: the Shudder Exclusive Incident in a Ghostland and the Shudder Original Belzebuth. Reasons four through nine: a special curated collection of the first six A Nightmare on Elm Street movies. Reason ten is all the rest of our lineup of new titles this month, including must-see shorts from Gigi Saul Guerrero (director of the recent Into the Dark: Culture Shock) and Sam Wineman (currently hard at work on Shudder’s upcoming queer horror documentary). Sun? Who needs it? (Programming also available on Shudder Canada and Shudder UK where noted.) NOS4A2 (2019) — first episode available on Thursday, August 8
Based on Joe Hill’s New York Times best-selling novel of the same name, NOS4A2 is a different kind of vampire story. It follows Vic McQueen, a gifted young woman who discovers she has a supernatural ability to find lost things. This ability puts her on a collision course with the evil and immortal Charlie Manx. Manx is a supernatural villain who feeds off the souls of children and then deposits what remains of them into Christmasland – a twisted place of Manx’s imagination where every day is Christmas Day and unhappiness is against the law. Vic strives to defeat Manx and rescue his victims – without losing her mind or falling victim to him herself.

Episode 1 premieres on Shudder August 8, with new episodes added every Thursday through October 10. Incident in a Ghostland (2018) — available Thursday, August 15
Director: Pascal Laugier, Cast: Crystal Reed, Mylène Farmer, Anastasia Phillips
A mother of two who inherits a house is confronted with murderous intruders on the first night in their new home and fights for her daughters’ lives. Sixteen years later when the daughters reunite at the house, things get really strange. A SHUDDER EXCLUSIVE. (Also available on Shudder Canada)

Incident in a Ghostland trailer: https://www.youtube.com/watch?v=15zAIucLvaU 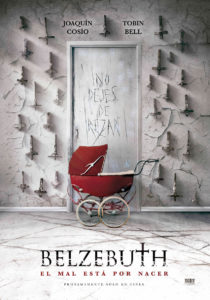 Belzebuth (2017) — available Thursday, August 29
Director: Emilio Portes, Cast: Tobin Bell, Joaquín Cosio, Tate Ellington
Set on both sides of the U.S.-Mexico border, this Spanish/English language film follows special agent Emanuel Ritter as he leads a police investigation into a series of mysterious deaths involving young children at the border. The case takes a supernatural turn when a priest from the Vatican links the ancient demon Belzebuth to the murders. A SHUDDER ORIGINAL. (Also available on Shudder Canada and Shudder UK)

NIGHTMARES ON ELM STREET: THE FIRST 6 MOVIES — available Thursday, August 1
One, two, Freddy’s coming for you / Three, four, better lock your door / Five, six, binge that many Elm Street pix… This month, Shudder presents a collection of the first six films in the A Nightmare on Elm Street franchise: Wes Craven’s 1984 original masterpiece, followed by Freddy’s Revenge (1985), Dream Warriors (1987), The Dream Master (1988), The Dream Child (1989) and Freddy’s Dead: The Final Nightmare (1991). If that’s not enough, round out your summer Freddy re-watch with the fascinating, comprehensive documentary, Never Sleep Again: The Elm Street Legacy (2010).

July 29 (added too late for last month’s highlights)
Moon (2009, Duncan Jones)
On the far side of the moon, lone miner Sam trudges to the end of his three-year stint for a mega-corporation that has hit a gold vein by harvesting lunar rock for energy. With only a self-mechanized robot (whose only human feature is a Happy Face/Sad Face component) for company, Sam shows signs of cabin fever. Hallucinating and obsessing about his wife and daughter on Earth, his fragile condition deteriorates, exacerbated when he gets whacked on the noggin as he crashes his rover on the lunar surface. Sam emerges to find an aggressive version of himself tromping around the space vehicle. Hallucination? Clone? Doppelganger? Starring: Sam Rockwell, Kevin Spacey, Dominique McElligott

El Gigante (2014 short, Gigi Saul Guerrero and Luke Bramley)
After attempting to cross the US/Mexico border in search of a better life, Armando awakens in an unknown room, his body broken down and a Lucha Libre mask sewn into his neck. He attempts to escape, but is surrounded by a sadistic family, who watch him with hungry eyes. The only chance for Armando’s survival in this hellish nightmare is to last in a wrestling match against the most terrifying villain of all: GIGANTE! Starring: Edwin Perez, Luis Javier, Arlina Rodriguez (Also available on Shudder Canada and Shudder UK)

The Quiet Room (2018 short, Sam Wineman)
After a failed suicide attempt, Michael’s believes that he’s awakened Hattie, a demon who — according to urban legend — haunts his hospital’s “quiet room.” Now, he must find a way to stop her before her rampage claims everyone Michael connects with. Starring: Jamal Douglas, Barkley Harper, Stephanie Kerbis (Also available on Shudder Canada and Shudder UK)

August 1
Raising Cain (1992, Brian De Palma)
The story of twin brothers, Carter and Josh, one good and one evil, who will stop at nothing to find children to further their father’s psychological experiments. Starring: John Lithgow, Lolita Davidovich, Steven Bauer

August 5
The Slumber Party Massacre (1982, Amy Holden Jones)
When Trish decides to invite her high school girls’ basketball teammates over for a slumber party, she has no idea the night is going to end with an unexpected guest — an escaped mental patient and his portable power drill — crashing the party in this cult classic. Starring: Michelle Michaels, Robin Stille, Michael Villella (Also available on Shudder Canada)

Slumber Party Massacre II (1987, Deborah Brock)
Courtney, the younger sister of the “new girl across the street” in the first film is all grown up now, but suffers from nightmares about the Big Wet Incident. She and the other members of her female rock group go to a condo for the weekend to play music and have fun with their boyfriends. Courtney’s dreams are of her sister, who is in a mental institution, warning her of having sex, and the dreams begin to spill into real life, threatening Courtney and her friends as they begin experiencing an attrition problem. Starring: Crystal Bernard, Jennifer Rhodes, Kimberly McArthur (Also available on Shudder Canada)

August 12
Chopping Mall (1986, Jim Wynorski)
A group of teenagers who work at the mall get together for a late night party in one of the stores. When the mall goes on lockdown before they can get out, the robot security system malfunctions and goes on a killing spree. Starring: Kelli Maroney, Tony O’Dell, Russell Todd (Also available on Shudder Canada)

Get My Gun (2017, Brian Darwas)
After an innocent prank leaves Amanda pregnant and out of a job, she finds herself on the verge of motherhood and the target of a psychotic stalker who will stop at nothing to get her hands on the unborn child. Starring: Kate Hoffman, Rosanne Rubino, Christy Casey (Also available on Shudder Canada and Shudder UK Ireland)

Why Horror? (2014, Nicolas Kleiman and Rob Lindsay)
Tal Zimerman is a horror journalist and a full-fledged fan of everything deep dark and disgusting. But lately he’s been asking himself WHY? Why is it that he and millions of other people are obsessed with horror? Tal sits down with leading genre filmmakers, writers, musicians, historians, anthropologists and psychologists around the world, to discover why we enjoy being scared. (Also available on Shudder Canada and Shudder UK Ireland)

August 19
Bad Moon (1996, Eric Red)
Ted is working in Nepal when he and his girlfriend are attacked by a mysterious creature. Ted, though brutally maimed, survives, but his girlfriend is not so lucky. To help his recovery, Ted moves close to his sister, Janet, and her son, Brett, but soon realizes he was attacked by a werewolf. Starring: Mariel Hemingway, Michael Paré, Mason Gamble (Also available on Shudder Canada)

Hell Night (1981, Tom DeSimone)
Sorority and fraternity pledges are required to spend the title evening of their initiation inside the spooky Garth Manor. The mansion was the site of a gruesome multiple murder, wherein the owner killed his wife and three of his four deformed children before taking his own life. After the pledges bed down for the night, mischievous upperclassmen descend into the house, intending to scare them out of their wits…but something even more repulsive than a pack of drunken frat-boys beats them to it. Starring: Linda Blair, Vincent Van Patten, Peter Barton (Also available on Shudder Canada)

The Love Witch (2016, Anna Biller)
Elaine, a beautiful young witch, is determined to find a man to love her, but her spells work too well, leaving her with a string of hapless victims. With a visual style that pays tribute to Technicolor thrillers of the 1960s, The Love Witch explores female fantasy and the repercussions of pathological narcissism. Starring: Samantha Robinson, Jeffrey Vincent Parise, Laura Waddell (Also available on Shudder Canada) 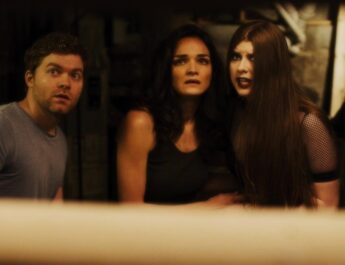