Trista Robinson grew up watching horror movies with her dad. Now, she’s in them. 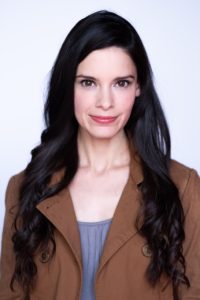 -PH: You’ve become a welcome presence in genre films. When did your association with horror begin?

-Trista: Thanks so much! As a young child I had a single father who was a huge horror buff so I was groomed early on. I grew up loving horror. When I decided to be an actor, I didn’t initially focus on horror, but rather it was just what I was booking. It feels sort of fateful!

-PH: Was one role in particular that you feel opened doors?

-Trista: Well, I think Alisa in Echoes of Fear has been truly significant! We have had a surreal response from horror fans after screenings and at Q and A’s. The festival response has been overwhelming in the best way. We have played at fourteen festivals all over the world and have six Best Feature wins. Unbelievable! Couldn’t be more grateful.

-PH: Since Marin Blue (2009), how have the types of films you’ve been interested in changed What do you look for in a script?

-Trista: I look for an arc within the character and story. I am often looking for something different than whatever I have recently worked on, and I also take into consideration the entire creative team working on the project.

-PH: What was it about the role of Alisa in Echoes of Fear that interested you?

-Trista: I don’t think Alisa is a cliché. I think she is strong and smart and subtle and underestimated. And she has a hell of an arc. -PH: For those that think they’ve seen it all when it comes to scary movies, how would you sell them on Echoes of Fear?

-Trista: Echoes of Fear is a wholly original take on the classic haunted house movie. The scares got me and I participated in the creation of them! The film really intensifies and goes in an unpredictable direction which has surprised even hard-core horror fans. As horror fans ourselves, we are especially pleased about that. Oh, and there is a super cute mouse!