From the Executive Producer of the SAW franchise

THE SHED
Beware the Evil Within

RLJE Films, a business unit of AMC Networks, will release THE SHED on January 7, 2020 on DVD and Blu-ray. Written and Directed by Frank Sabatella (Blood Night), the film stars Jay Jay Warren (“Bosch”), Cody Kostro (“City on a Hill”), Sofia Happonen (Woman of a Certain Age), Frank Whaley (Pulp Fiction), Siobhan Fallon Hogan (Men in Black) and Timothy Bottoms (The Last Picture Show). RLJE Films will release THE SHED on DVD for an SRP of $27.97 and on Blu-ray for an SRP of $28.97.

In THE SHED, Stan and his best friend Dommer have put up with bullies their entire lives. All of that changes when Stan discovers he has a murderous vampire living in his shed. Seeing the bloodshed and destruction the monster is capable of, Stan knows he has to find a way to destroy it. But Dommer has a much more sinister plan in mind. 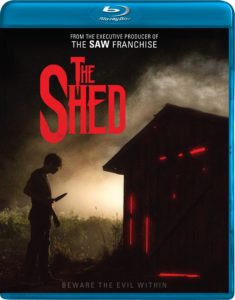