Black Fawn Distribution has acquired the Canadian rights to the cult horror hit Scarecrows. The company has also announced that it has moved up the digital release of the film by three months. Scarecrows is set to debut on all major Canadian digital VOD platforms next Tuesday, May 19, 2020. The film has already become a sleeper hit in one of horror’s most interesting sub-genres. 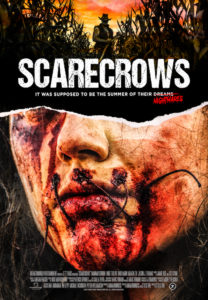 “Originally, the plan was to release Scarecrows this fall,” explains Black Fawn Distribution’s Operations Manager CF Benner. “However, we understand that people are doing the right thing by staying home right now and, since we had the ability to move up the release date, we figured why not? This really is a fun horror flick and, as a genre film distributor, it’s our responsibility to get films like Scarecrows out to horror fans, regardless of the circumstances.”

Produced by 5’7 Films and Breakthrough Entertainment Inc., and directed by Stu Stone (The Haunted House on Kirby Road, Jack of all Trades) , Scarecrows follows four stoner teenagers who, while on a hike to find a secret lagoon, are kidnapped by a psychotic farmer and turned into scarecrows. The film stars Hannah Gordon, Mike Taylor, Umed Amin and Maaor Ziv. Scarecrows was co-written by Stu Stone and Adam Rodness, with Rodness serving as producer.

“When Black Fawn Distribution presented us with an opportunity to release Scarecrows across Canada, it was a no-brainer for us,” states director Stu Stone. “We hope our film can help people escape the crazy cycle of watching stale reruns and old sporting events while doing the responsible thing during self-isolation. We are beyond thrilled to have the opportunity to share our film across Canada and thank Black Fawn Distribution for making it possible so quickly!”

“Making a movie is a crazed task to begin with and there’s nothing more satisfying than being able to share it on your home turf,” concurs producer Adam Rodness. “Black Fawn Distribution has proven themselves as a powerful distribution outlet for genre films across the board. This is a valued partnership and we are proud of them being able to release Scarecrows across Canada.”

While on a hike to find a secret lagoon, four stoner teenagers are kidnapped and turned into scarecrows by a psychotic farmer.

While on a hike to find a secret lagoon, four stoners have no choice but to pass through an ominous cornfield. Unbeknownst to them, a psychotic farmer despises trespassers and has vowed to kill anyone who crosses his land by turning them into living scarecrows, leaving them to rot in his fields. Once one goes up… it never comes down.

5’7 Films was co-founded by brothers-in-law, Adam Rodness & Stu Stone. Best known for their comedy-horror films Scarecrows and The Haunted House on Kirby Road, 5’7 Films has shown proven success in the marketplace with trending films on Netflix like Jack of All Trades and the Rockie Award Nominated series The Thrillusionists for CBC. Their development and production model focusses on the independent marketplace with distribution partners such as Breakthrough Entertainment and LevelFilm. Their latest project is the anticipated true crime mockumentary, Faking A Murderer, financed in part with Hollywood Suite and Breakthrough Entertainment.

Black Fawn Distribution continues to be responsible for the release of high-quality horror and genre films across Canada including Harpoon, I’ll Take Your Dead, The Heretics, The Ranger, In the House of Flies and Bite. The company’s promotional team is driven by a passion to release physical product for the enjoyment of both horror fans and film collectors alike while also focussing on alternative platforms for digital delivery. Black Fawn Distribution: For Filmmakers. By Filmmakers.