The Fantasia International Film Festival will be celebrating its 24th edition as a virtual event accessible to movie lovers across Canada. Because of the unique times we find ourselves in, it will be taking place online from August 20 through September 2, 2020. Going online will be a big change, but fans should still expect to see a selection of some of the best films of the year. For fellow horror fans, we put together a small selection of world and international premieres that we think you’ll be interested in. Of course we want you to check out as many of the horror films that you can. They really did put together a great mix of films that should bring a smile to any horror fan’s face!

After losing their only grandson in a car accident, grief-stricken Audrey (Sheila McCarthy) and Henry (Julian Richings), a doctor, kidnaps his pregnant patient with the intentions of performing a “reverse Exorcism”, putting Jackson inside her unborn child. It doesn’t take long to figure out Jackson isn’t the only ghost the grandparents invited into their home. Now it’s a race against time for the couple, as well as the pregnant woman to figure a way out of the haunting they’ve set upon themselves.

It’s the late ‘90s. Arkansas. Nurse Mandy (MAY’s Angela Bettis) is staring down a double shift at a hospital she’d rather be nowhere near. But she needs to go in. For one, because she’s an addict, and the extra pay will go a long way. More importantly, she needs to go because it’s the hospital work that funds her habit – largely via an organ harvesting side-gig that she’s managed to carve out for herself. Tonight will be especially taxing for her. Because people are complicated. And she’s going to be stuck dealing with many of them. Situations will spiral out of control through an ascension of grisly happenings, unfortunate twists of fate, and terrible, terrible choices.

With BLEED WITH ME, her feature debut, director Amelia Moses invites us on an intimate cabin trip where boundaries and relationships collapse. Rowan (Lee Marshall), a shy and awkward young woman, struggles to integrate herself on a weekend getaway with her best friend, Emily (Lauren Beatty) and her unfriendly boyfriend, Brendan (Aris Tyros). Feeling like a third wheel, she drinks to calm her nerves, pushing her body and mind deep into a hazy trance, where she begins to witness nightmarish late-night visions that make her feel increasingly unwelcome, unsure and unstable. A slow-burn thriller with arresting visuals, BLEED WITH ME, captures a vulnerability and discomfort as it explores issues related to self-harm and social isolation. Set against a wintry backdrop, BLEED WITH ME uses the limits of a small budget to its full potential. 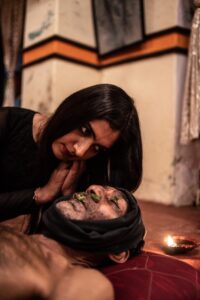 While working a club set, DJ Neel (Noble Luke) encounters the ravishing Sitara (MEHSAMPUR’s Navjot Randhawa) and is utterly transfixed by her. They go back to her home and he’s immediately met by the furthest scenario that ever could have crossed his mind – a grieving family in a ritualistic space, gathered around her father’s dying body. As India’s patriarchal death customs dictate that a male offspring read a parent’s last rites – and no such son exists in Sitara’s family – enormous pressure is put on a very surprised Neel to perform the act. It isn’t the strangest thing that he will encounter in this household. As night crosses over into day, it soon becomes evident that Sitara’s family is afflicted by an ancestral curse. One that Neel is now very much a part of. 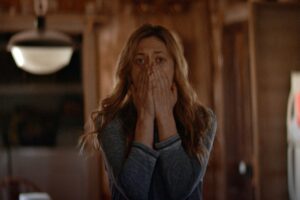 The Dark & The Wicked

Ensconced deep in rural seclusion, there is a farm. On this farm, there is a house. In this house, there is an elderly man. This man is slowly dying. His adult children, Louise (Marin Ireland, SNEAKY PETE) and Michael (Michael Abbott Jr, THE DEATH OF DICK LONG), have both put their lives on hold and returned home to be with him in his most difficult hours. The house holds terrible energies. Palpably horrific. Louise and Michael both sense it. They initially try to ignore what their guts are screaming to them, but soon, waking nightmares make that an increasingly difficult thing to do. One freakish happening follows another. Something evil is taking over the household.

Something terrifying is happening off the coast of Block Island. A strange force is thriving, influencing residents and wildlife alike. Birds are dropping out of the sky. Some people have been dropping too, into inexplicable emotional collapse. Harry Lynch (Chris Sheffield, THE STANFORD PRISON EXPERIMENT) has always been a bit of an outsider in town. Now, he watches in dread as his father (Neville Archambault, 13 CAMERAS) grows increasingly forgetful and confused. And angry. Very, very angry. His sister Audry (Michaela McManus, THE VILLAGE), whose work in marine biology will soon prove invaluable, returns to town with her daughter and immediately sees what Harry sees. Her explorations into the increasingly grisly wildlife phenomena intersects with the triggers of her father’s actions, leading them all towards chilling revelations that no one is prepared for. Revelations that will affect her family in unimaginable ways.

18-year-old Sarah (HONEY BEE’s Julia Sarah Stone) is having troubles. A tense situation at home has her avoiding the place as much as possible, crashing with friends, in a park, anywhere, and it’s ruining her at school. A call for participants at a university sleep study comes at precisely the right time, offering both a space to rest her head and perhaps a way towards healing past the terrible dreams that have been tormenting her. Before long, Sarah realizes that she’s become the channel to a frightening new discovery. Dreams twist. Nightmares come true.

The Curse of Audrey Earnshaw

Young Audrey Earnshaw (Jessica Reynolds) and her mother, Agatha (Catherine Walker, A DARK SONG), live clandestinely as occultists on the outskirts of a remote Protestant village. Having gone to enormous lengths to hide Audrey’s existence from the community over the years, in part due to her having been born in secrecy, in a context that would never have been accepted by the superstitious townspeople, Agatha kept her close and guarded at home. As a consequence, a controlling relationship has developed. One day, a mourner from town catches sight of Audrey, and whispers begin. The community has recently been left reeling from a series of inexplicable tragedies and hardships. Now, livestock and crops are falling prey to an unknown disease. Somehow, the Earnshaw farm has remained unaffected. Suspicions grow. Hysteria mounts. Meanwhile, Audrey’s upbringing around ritual magic has borne fruit. Her abilities are blossoming, becoming stronger and more forceful by the day. Alongside her anger.

Besides these fabulous feature premieres, there will be a great slate of shorts to accompany them. That’s not all, there will be some terrific panels, talks, tributes, and special events. And of particular interest to horror fans, horror icon John Carpenter will receive a Lifetime Achievement Award, and he’ll be giving a Masterclass to discuss everything from his own festival origin story to his awe-inspiring career, touching on HALLOWEEN, THE FOG, ESCAPE FROM NEW YORK, THE THING, STARMAN, THEY LIVE, and many more. 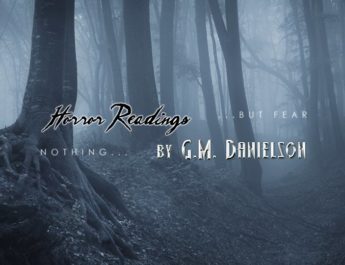 Blood in the Snow announces its 2016 List of Festival Attendees 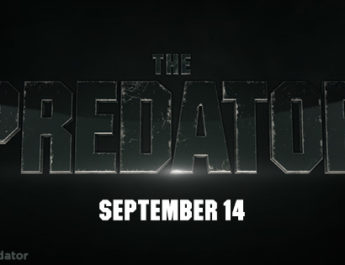 Official Trailer for “The Predator”