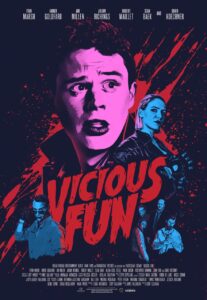 Life comes terrifyingly close to imitating art in Vicious Fun, the new horror-comedy from Breakthrough Entertainment and Black Fawn Films made in partnership with Particular Crowd, the original movie banner of WarnerMedia Entertainment Networks Latin America. The first trailer and poster for the exciting new project have just been released.

The film follows Joel (Evan Marsh), a caustic 1980’s film critic for a national horror magazine, who finds himself unwittingly trapped in a self-help group for serial killers. With no other choice, Joel attempts to blend in with his homicidal surroundings or risk becoming their next victim.

“Vicious Fun was hands-down the most entertaining set I’ve ever been on,” explains director Cody Calahan. “It was an extremely collaborative process right across the board, from the talent on the screen to the talent behind the scenes. We wanted to make something nostalgic, hilarious, and a film that was just flat-out fun. I think we accomplished that.”

Vicious Fun is set to have its much-anticipated world premiere at the Sitges Film Festival in Spain this October. The film will open up the festival’s Panorama Fantastic section on opening night.

“We’re incredibly excited to unveil Vicious Fun as part of this year’s Sitges lineup,” states Breakthrough Entertainment’s Feature Film Coordinator Chris Benn. “When you can take an eclectic cast such as this one and drop them into a world full of neon hues, generous blood splatter and 80s synth rock – well, that’s just a cool time at the movies. Vicious Fun is a blast!”

“An outrageous mash-up of dread and humour, Vicious Fun lives up to its title,” said Craig McGillivray, Breakthrough Entertainment’s Vice President of Distribution. “We are thrilled to have Particular Crowd as a partner on this film and look forward to sharing the howls and horrors we’ve created together.”

Breakthrough Entertainment Inc. is an award-winning producer and distributor of premium content for worldwide audiences. The entertainment studio’s operations include the development and distribution of feature films, television and digital content; international co-productions and production services. Breakthrough’s digital media division ranks amongst the industry’s most respected producers of high-quality interactive entertainment on mobile and online platforms. Established over 35 years ago, Breakthrough’s library now boasts over 40 feature films and 4,000 television episodes which air on major networks and digital channels across the globe. The studio has been recognized with international awards including numerous Geminis, Canadian Screen Awards, and Canadian Comedy Awards.

Black Fawn Films Inc. is an award-winning Canadian film production house dedicated to bringing creative and innovative talent together in order to create unique and high-quality genre projects. With over 25 feature films under their belt (The Oak Room, I’ll Take Your Dead, Let Her Out, Antisocial, Bite), Black Fawn Films has become a staple in the Canadian and international film industry.

Particular Crowd is the original movie banner of WarnerMedia Entertainment Networks Latin America, a division owned by WarnerMedia. The banner has a growing slate of over 70 films that appeal to a universal audience, not only across the diversity of Latin America, but around the world. The movies are produced in English, Spanish, or Portuguese, and across the popular genres of comedy, rom-com, horror, thriller, teen, and family. This is a content-driven, contained budget production initiative, that puts the consumer first in the availability of its content on a wide variety of platforms, including TV (TNT and SPACE), OTT, theatrical, and digital spaces. Based in Los Angeles and Buenos Aires, Particular Crowd encompasses development, production and co-financing and has established key content partnerships with leading production companies. The banner seeks to discover new talent to provide access and opportunities for the next generation of filmmakers.