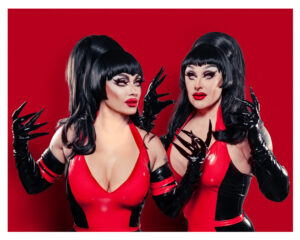 The Dread Central Podcast Network is proud to welcome The Boulet Brothers’ infamous podcast show “Creatures of the Night’ to their ever-growing slate of original programming. Join the iconic horror hosts Dracmorda and Swanthula Boulet as they discuss all things drag, horror, glamour, and gore, with their first double-feature episode available today on Dread, and with new episodes every other Thursday.

“We are incredibly excited about partnering with Dread Central for future episodes of ‘Creatures of the Night’,” says Dracmorda and Swanthula Boulet. “Dread is the “go to” place for all things horror and it’s an honor to be featured under their umbrella. It’s a great home for what we have planned for the next chapter of the show.”

The Boulet Brothers’ ‘Creatures of the Night’ features co-host Ian DeVoglaer, and a roster of esteemed special guests from the intersection of queer media and horror, including enigmatic cyber witch and pop singer Poppy, burlesque star Dita Von Teese, actress Rose McGowan, Darren Stein (writer and director of Jawbreaker), and Rachel True (star of The Craft), with the list growing every episode. The Boulet Brothers welcome listeners as they discuss their latest projects, provide behind-the-scenes sneak peaks, review the latest horror movies, and give listeners real life horror history lessons on famous hauntings from the past. 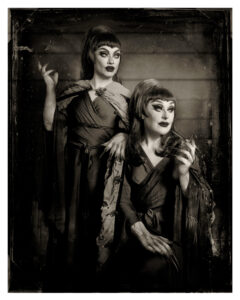 “We are extremely excited to welcome the Boulet Brothers’ hit podcast ‘Creatures of the Night’ to our network,” says Jon Condit, co-founder of Dread Central. “The Boulet Brothers exemplify the fact that horror and alternative drag serve as a lens to subvert cultural norms, testing the boundaries of taste while simultaneously exploring and pushing back against how culture can come to confine us. It’s no surprise that the Boulet Brothers’ world and the world of horror would draw from the same wellspring, often confronting the same fears, complexities, and taboos.”

The Boulet Brothers’ ‘Creatures of the Night’ joins Dread Central’s roster of horror programs including The Who Goes There, G.U.T.S, and Real Professional podcasts. For more information on the Dread Central Podcast Network please visit https://www.dreadcentral.com/dread-central-podcast-network/

About Epic Pictures x Dread
Since the foundation of the company in 2007, CEO Patrick Ewald has grown Epic Pictures into an independent content studio with the mission of delivering the best-in-class genre entertainment “for fans, by fans.” Epic Pictures produces, finances, and distributes approximately twenty-thirty independent genre films a year. In 2013, the company established Epic Pictures Releasing which is its US focused distribution division. In 2017, Epic Pictures acquired the world’s most popular horror website, Dread Central, and launched its unique horror label, Dread, followed by its AVOD channel, DreadTV as well as the Dread Central Podcast Network. In 2019, Epic Pictures started the horror gaming site, DreadXP, with a focus on editorial, reviews, and original streaming content. In 2020, DreadXP began a video game publishing division with the launch of The Dread X Collection, an anthology of horror games in collaboration with some of the most innovative developers in the independent gaming space.
https://epic-pictures.com https://dreadcentral.com https://dreadxp.com