-PH: I’m not sure how much you know of it, being the producer and not the writer, buy can you tell us about the inspiration for “The Hex”?

-Mari: Reine Swart who is the writer lived in house filled with African masks and décor.  She always wondered where they came from and whether each of them had a story to tell, and that’s where the seed was planted.  Yes, the Hex is about a British girl who investigates her mother murder, but more in dept, it’s about the hidden story about the one African mask.

-PH: I know Reine Swart’s previous film – that she acted in – was based on a South African fairytale.. and a frightening one of that. So that’s where the question comes from, whether “The Hex” is based on any kind of factual event?

-Mari: The Hex is a fictional story about factual entities in South Africa.  There are real witch doctors and a big community that believe in the magic these healers do.

-PH: Did you have a backstory for Anathi, even if it wasn’t on the page?

-Mari: Yes I did have.  Anathi is a hard working therapist and has a big heart.  That’s why she found it hard not to help Dilanne with her investigation.  It was easy to connect with her, as I myself have the need to help others where I can. 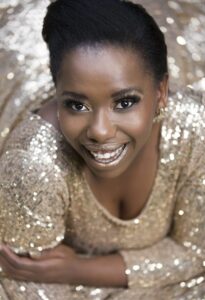 -PH: What makes the character tick? What’s her motivation here?

-Mari: Unfairness and injustice I would say makes her tick and she felt that she needs to help and stand up for what is right.  She finds it difficult to hold in the truth if it could help the grieving Dilanne.

-PH: Those locations are striking -where was it filmed?

-Mari: It was filmed at KleinKaap Boutique Hotel in Centurion, a city close to Johannesburg in South Africa.  We were fortunately to film there as it has so many different interesting spots.  The woods, rooms and the bar, all shot in one location, and that made filming The Hex just so much easier.

-PH: Do you think “The Hex” will be your calling card to U.S horror movies? Is that part of the plan?

-Mari: One can only hope right.  It was released in the US in December 2020, so who knows, my next film might be in Hollywood soon.