Written, directed and produced by Jon Binkowski, the film is follow up to his 2014 film, The Visitant. This second film reunites several of the original cast members including: Michele Simms (Killer Kids), Sallie Glaner (Marriage Killer) and Lisa Enos Smith. Smith has also executive-produced both films.

Co-written by Stephen DeWoody and produced by Patty Bender, the film centers around a single mother and her two teenage daughters. Together, they find themselves under attack by an evil entity that was passed onto them by its previous victim. 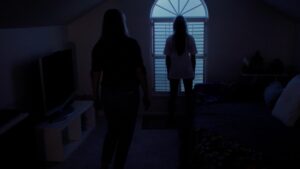 REVISITANT will make its worldwide debut Friday, March 5th on the KINGS OF HORROR Youtube Channel. The KINGS OF HORROR channel hosts over 1 million subscribers and is still growing. As well, The Visitant debuted on KINGS OF HORROR in November of 2015 and has garnered over 7-million views. Now, this original film will be reintroduced to horror fans as a lead-in to REVISITANT. The showing of The Visitant will include a live chat with filmmakers Jon Binkowski and Lisa Enos Smith – on February 26th. To join that event, visit this link here  and set a reminder: https://youtu.be/7KDrmYRUc4o

Then, REVISITANT will be released across multiple digital platforms on April 16th, six weeks after its initial streaming window on KINGS OF HORROR. In advance of the film’s debut, the genre distributor is sharing the official trailer, poster and several images – to give horror fans a sneak peek.

To learn more about KINGS OF HORROR, visit their official channel at: