Directorial Debut from Alexandra Pechman, Writer Of Blumhouse’s Into The Dark Thriller ‘TENTACLES’

An infamous artist’s home becomes rife with ghostly horror in the new short film THUMB, directed by Alexandra Pechman, world premiering at this year’s Fantasia Film Festival in the “Small Gauge Trauma” shorts block on August 10th and 12th, 2021. With echoes of Gothic narratives and Giallo films, THUMB presents a chilling, female-forward look at how those close to artists try to free themselves of their influence… and their madness.

Pechman, who wrote Blumhouse’s 2021 thriller TENTACLES for Hulu and has written for SyFy’s CHANNEL ZERO, makes her directing debut with this art-world-inspired mystery. THUMB opens with the recent death of a controversial performance artist, whose daughter, Thumb, has been left to care for her mother’s artistic estate…until an unexpected visitor comes to claim the most notorious work. Starring Kate Adams as “Thumb” (Mike Mills’ I AM EASY TO FIND, Amber Sealey’s NO MAN OF GOD) and DeMorge Brown as “Red” (THE DRESS UP GANG, CORPORATE), the 10-minute short takes an eerie, unsettling look at the intersection of art, fear, and family.

Pechman, a former arts writer for magazines such as Artforum, W, and Vogue, took inspiration from artists such as Chris Burden and Marina Abramović, who harmed themselves in their performances, as well as from famous artist estates such as the Judd Foundation. “There are so many aspects of the art world that, to me, lend themselves to horror,” Pechman explains. “The blankness of a white-cube gallery, an artist’s home left as it was when she died, artists who bleed or die for their work: they’re ideal tropes for ghost stories.”

The film’s concept came from an interview with a MoMA curator, who told Pechman about trying to gain access to a long-dead artist’s work because a sister owned the artist’s estate and forbade the art from view. “I was fascinated by the story,” Pechman explains. “Why would someone keep her family member’s legacy locked away? I tried to imagine what personal grievance could motivate her, or what horror might reside in the art itself. Maybe it was cursed.”

After an intensive research period with Adams, during which the two women crafted the story and world of THUMB, Pechman wrote the script, examining a mother-daughter relationship. The short features a female-led creative team, with Julia Swain (LUCKY, SPEED OF LIFE) as DP, Adams and Pechman as executive producers, and producer Jesy Odio, whose Teenager Entertainment served as production company.

Alexandra Pechman and Kate Adams are available for interviews. Pechman recently received a Spring 2021 Funding Grant from The Future of Film is Female for her next short film, SLEEP. Adams also stars in the short film FOREVER & EVER screening at this year’s Fantasia.

THUMB screens virtually at Fantasia August 10th at 9:30PM EST and August 12th at 9AM EST. 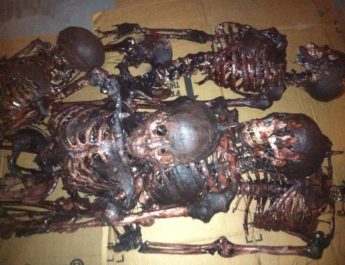 “DEEP IN THE WOOD” and “GARDEN OF STARS” Announced for June