Our ‘Focus on Fantasia 2021’ series takes a look at some of the terrific horror films coming to this year’s Fantasia International Film Festival. Today we focus on one of the festival’s In Person & Virtual Screening titles, “#Blue_Whale.”

A provincial Russian town is ravaged by a wave of inexplicable teen suicides. Rebellious and sharp-witted schoolgirl Dana (Anna Potebnya, SAMA DURA) grieves for her younger sister, a once-happy kid who suddenly withdrew and stepped in front of a train. Desperate to learn what happened, Dana explores her sister’s online history, discovering a sinister social-media game that encourages youths to take an escalating series of self-harm challenges – 50 tasks in 50 days. Beginning with actions designed to alienate them from friends and family, the challenge breaks its victims lives apart to push them past any point of return. Hungry for answers and out for revenge, Dana registers for the game, opening a doorway into the cruelest of hidden online worlds. One that will jeopardize the lives of everyone she cares about.

Based on actual cybercrimes that ripped across Eastern Europe and may have been responsible for over 130 deaths (along with the Japanese Momo hoax it inspired) #BLUE_WHALE is the startling feature debut from writer/director Anna Zaytseva, whose shorts have won no less than 16 awards on the festival circuit. Co-produced by Timur Bekmambetov and shot in the Screenlife storytelling format that he pioneered (as seen in PROFILE, SEARCHING and the UNFRIENDED series), the film thrusts its audience into a universe of spiralling paranoia and gut-wrenching dread, anchored by Potebnya’s terrific lead performance and a screenplay that crafts her character with empathy and intelligence. Both a confrontational shocker and a fiercely engaging thriller, made all the more gripping by the immediacy of the Screenlife approach, #BLUE_WHALE taps into something disturbingly insightful about the ways that teens can find themselves manipulated online. It’s a horror film. No question about that. It’s also a warning. – Mitch Davis 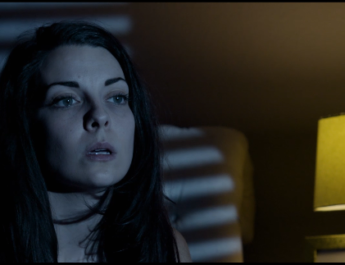 Hoodman – An Urban Legend Thriller That Gets Under Your Skin