Stab. Skate. Repeat. With much power, drive and tenacity, the 16th feature film from Hollywood’s only hope, Jared Masters, has been signed, sealed and will be delivered to a streaming platform near you, next summer. The film is like none other. A candy-coded “Who-dished-it?” The first of its kind. Colorful, creepy, crazy, outlandish but never crude. Ridiculous in all the right places. You’ve never seen another movie like… Roller Junkies!

The film starts at a skate park, where L.A.’s notorious Neons wreak havoc on unsuspecting skater victims. You better not perform your best trick in front of them because they’ll be jealous and kill ya! (Or blow off a lot of hot air about how they’d like to!) The main thorn in their side is them Animals, malicious but marvelous, carnivorous but casual. Older, wiser, almost out of high school. They claim the turf by the surf and make sure no Neons show. So how they gonna face off when it’s two on three and the sun beats down so hot and heavy?

Allison comes to town, with a suitcase and a quarter (she’ll soon blow on bubblegum). It’s not long before the Neons corrupt her, into an innocent version of them. But she can’t sling 3D glasses fast enough. The tourists (Tom Gander) barely buy and those hot pink uniforms don’t pay for themselves. Trouble’s on the horizon. Fear and threats lurk around every corner like sunshine at the horizon. Then the unthinkable happens! But to find out you’ll have to wait and rent it next year, for $1.99 (or pay more to own, and we believe you’ll truly want to own this one, forever on your hard drive, so that you may experience the wonders and glee, again and again). 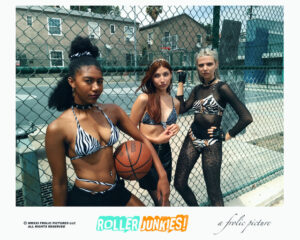 The motion picture is bedazzled by the greatest new talent available in Tinseltown today. McKenna Alvizo is Allison AKA Black Lips. With a killer cuteness, jousting with a juggernaut of joy, she blows bubbles backed with a deadly wish or curious question. The ladylike lovable dream queen, Elizabeth Rath, lends her quips and call-outs in the larger-than-life Krypto Kim. She’ll claw her way to the top with her ten keratin cousins, she files nightly. If those don’t persuade you, watch out! She’ll bash you and smash you with her high-grade titanium nun-chucks. You won’t be left without a very persistent headache, as you bake in the sun under her boot-heel. Then there’s Lucky. Forget about it. If she doesn’t seer you from the sheer sight of her, you won’t last long, ‘cause soon she’ll reveal the cold steal from her five star-shaped bladed friends, that she’ll parade around your inequivalent cranium. Think she’s done? Think again! She’s got big plans to destroy you, rifle through your underwear drawer, see if there’s a clean enough pair, that fits! In struts Jayda Raymond as Sno Flake, the stupendous staple that guards the door and puts whoever walks through it on the floor, instantaneously, with a new fusion martial art that she invented, on her own. It involves being whacked, by a very solid black baseball bat. But if you’re bleeding out because of it, consider yourself fortunate enough to be amongst her. Cool, calm and collected enough lunch money to buy herself a two piece, to tie it all together. Oh yeah, she’s all that and bag of chips and she’s in this movie! Who’s next? Aly Rae Santos-Tanner as Jinxie, the one you don’t want around. Why? Bad things happen. She’s unlucky, unpredictable and unwanted by most. Doesn’t read books but got an education from cons, beatniks and crooks. She’ll be even more popular after this movie. Then there’s Jillean Cooper-Watson as Venus. Her slingshot pepperballs will make you fall to your face and whine from the sting, as she’s grinds past you. You’ll know she likes you by the stick of gum she’ll offer. But don’t make her wait or your fait is sealed and certified. Your chance with her is charred and buried.

So be warned. Her and the rest of the squad are comin’ for ya. Look for it next year On Demand, Video and DVD. There’s plenty more great players that buffer this family-fun fest from Frolic Pictures. James F. Gregory as the biological father, Reg. He’s not rough, but gruff and he’ll give the girls a Hollywood-sized portion of what’s right, just mind the dust mites and discarded toe nails. We’ve got a few from the original Frolic Family… Art Roberts, Dawna Lee Heising (wish we got Geo Sargent too, to play a zany news reporter, but we didn’t). Voice over artist Jeffrey Dean Gray brings life to the pier as an outlandish and unforgettable Whack-A-Mole Operator. And lastly, the real red cherry to this pertinent pineapple sundae is the serene, sensational and stupendously sarcastic and oh-so-fine Addison Alex as Countess Aquarius.

Inspired partially by Drop Dead Gorgeous (1999), Best in Show (2000) and Jawbreaker (1999), whose theatrical poster is featured in the film on Jinxie’s bedroom wall. This genre-bender could only have been written by Jared Masters and Elizabeth Rath. Directed by Jared Masters (Slink, After School Massacre, 8 Reels of Sewage). Produced by James F. Gregory, Rodger Ball, Stan Divranos, Dominic Fedrizzi, Jeffrey Dean Gray, Lucas Wagner and Alan Smithee. With script supervision and assistance by Violet Gonzalez. Special thanks to the many other tireless crewmembers. This website would crack if we gushed about you all but we appreciate and paid every single one of you. (We’re sorry we had to go through so many caterers before finally finding a truly decent one, with all the fixins). And Special Thanks to the following for helping make this passion project come true: Christopher Michale Dailey, Kathryn Alvizo, Willy Die, Randy Masters, Cory Walton and especially… Chaz Dean, for reminding us that you can achieve anything, as long as you believe in yourself.

Check out the hot new trailer and learn about the many other movies from Jared Masters at frolicpictures.com. ‘Roller Junkies!’ is currently being dissected in the cutting room. Look for it next summer, 2022. You won’t want to miss… The beach bunnies that kill!… Theoretically. 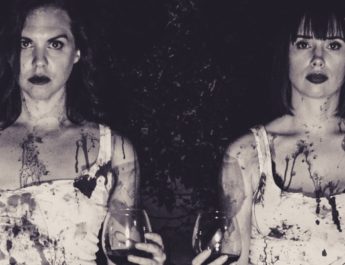