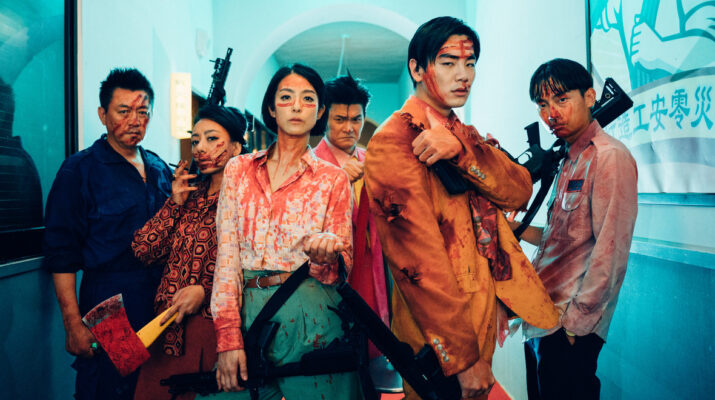 IT’S NOT OVER YET!!
THE NEW YORK ASIAN FILM FESTIVAL UNVEILS
TAIWAN GHOST MONTH, CELEBRATING A NEW ERA OF TERROR! 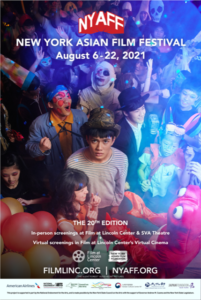 The New York Asian Film Festival is pleased to present a deliciously chilling aperitif to cap off our successful 20th edition. Starting immediately after NYAFF’s main course, we will serve up a ten-day virtual series of tasty horror films to celebrate Taiwan’s traditional Ghost Month.

Says NYAFF Executive Director Samuel Jamier, “Asian movies have helped forge the gold standard of horror. Japan, Thailand, South Korea and Hong Kong boast some of the most frightening films in the history of world cinema. While Taiwan seems to have flown under the radar, its horror films, with their pervasively sinister atmospherics, not to mention a singular vision of vengeful ghosts, have proven to be a major force to be reckoned with in the past few years.”

This series showcases a constellation of domestic box-office hits from recent years that have been critically praised for incorporating Taiwanese folklore, Chinese mythology, contemporary social issues and historical tragedies into their succinctly unnerving narratives.

THE SEVEN FILMS IN THE SERIES ARE:

Detention directed by John Hsu, NYAFF 2020. An adaptation carved from a survival horror video game, it’s also the first mainstream take on the island’s traumatizing White Terror era in the 1960s, during which thousands were executed. The film rightfully won awards in five categories at the 2019 Golden Horse Awards in Taipei.

Get the Hell Out directed by Wang I-Fan, which premiered at the Toronto International Film Festival, is a scathingly hilarious critique of political dysfunction in which a zombie virus permeates parliament, with gonzo martial arts antics and a brash young female politician who may be the government’s best hope for survival.

The Heirloom directed by Leste Chen, is an aesthetically exquisite haunted house shocker whose impressive deployment of creepy atmospherics, dread and impressive visuals proved to be a Taiwan genre cinema game-changer in 2005.

Mon Mon Mon Monsters directed by Giddens Ko, NYAFF 2017. Renaissance man Ko pulled out all the stops in this outrageous mash-up of a college bully dramedy and a wild SFX-laden monster thriller that is out of this world.

Silk directed by Su Chao-Bin. Screened out of competition at the 2006 Cannes Film Festival, this intriguing tale of a group of young ghost hunters (led by the uber-charismatic Chang Chen) chronicles their misguided attempts to use paranormal alchemy to capture the daunting spirit of a dead child.

The Tag-Along directed by Cheng Wei-hao, NYAFF 2016. Inspired by an actual viral video, The Tag-Along was a huge sleeper hit. A video of a group of hikers followed by a ghostly little girl in red evolves into tales of supernatural havoc unleashed upon the unsuspecting living.

The Taiwan Ghost Month Series runs from August 23 to September 1, and is presented with the support of the Taipei Cultural Center in New York, in celebration of its 30th anniversary.

But before you get your chill on, don’t forget that the New York Asian Film Festival is currently entering the last week of its milestone hybrid 20th edition.

The award-winning animated cautionary tale City of Lost Things and the Korean coming-of-adulthood dramedy Ten Months, both in the Uncaged Awards Competition.

A perfect segue from the 2020 Olympics: an inspiring biopic of the real-life champion who overcame unfathomable adversity, Zero to Hero.

The perfect romantic salve for the pandemic doldrums, Here and There, starring one of this year’s Variety Star Asia Rising Star Award recipients, Janine Gutierez (A Girl and a Gun, NYAFF 2020).

For the complete list of films, schedules and other information, please visit nyaff.org or download the NYAFF 2021 Program book here.

GET THE HELL OUT 逃出立法院

TICKET PRICING: $5 per film. Free if you already own an SVA+Eventive All-Access Pass

Now in its 20th year, the New York Asian Film Festival (NYAFF) is North America’s leading festival of popular Asian cinema, which The Village Voice has called “the best film festival in New York,” and The New York Times has called “one of the city’s most valuable events.” Launched in 2002, the festival selects only the best, strangest, and most entertaining movies to screen for New York audiences, ranging from mainstream blockbusters and art-house eccentricities to genre and cult classics. It was the first North American film festival to champion the works of Johnnie To, Bong Joon-ho, Park Chan-wook, Takashi Miike, and other auteurs of contemporary Asian cinema. Since 2010, it has been produced in collaboration with Film at Lincoln Center.

The New York Asian Film Foundation Inc. is America’s premier 501(c)(3) nonprofit organization dedicated to the exhibition and appreciation of Asian film culture in all its forms, with year-round festivals and programs, and a view to building bridges between Asia and America.

The New York Asian Film Foundation’s flagship event is the annual New York Asian Film Festival (NYAFF), which has been presented in collaboration with Film at Lincoln Center since 2010. Now entering its 20th year, NYAFF is North America’s leading festival of Asian cinema.

The Foundation’s other events and initiatives include special screening events and an annual Winter Showcase at the SVA Theatre.

ABOUT THE TAIPEI CULTURAL CENTER IN NEW YORK (TCC)

The Taipei Cultural Center in New York (TCC), which was established as the first overseas office of Taiwan’s Ministry of Culture in 1991, builds connections through arts and culture in New York and throughout North America. Each year, the center reaches out to art museums, theaters, performing arts centers, film cinemas, festivals, curators, and presenters in the US and Canada. TCC supports international cultural exchanges, collaborations, and artistic events in order to introduce Taiwan’s arts and culture to a broader audience.