To be released in theaters and VOD November 16th, 2021

April Davis was a rising star in her first job out of college. When her parents are killed in an accident, she is forced to return to her hometown and serve as legal guardian to her younger brother Jax, whose irresponsible behavior contributed to the deaths of her parents. As usual, April was making the best of the situation. Thriving in her career and role as executor of the family estate. However, a tragic automobile accident turns her entire life upside down as an innocent family is killed, and April is left in a coma. 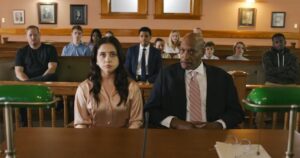 When April awakes from a coma, she finds that a man, who’s relationship she considered “casual dating” had been by her bedside the entire time. April faces many more months of recovery time, this fiercely independent young woman is forced to rely on a man who she hardly knows for survival. As April continues her long road to recovery, strange events start to take place in her daily life forcing her to question what is real and what is imagined in her mind.

Not being able to count on her brother Jax and with no family or friends with whom to turn, April must rely on her “boyfriend” Robert. However, she is not sure Robert is the person he presents himself to be.

As April recovers, she turns to alcohol and pain pills to help her cope with the terrifying events that haunt her days and nights. April must find the strength to face these terrors as she is unsure if they are real or worse, if they exist only within her imagination.

“Night Night” is an incredibly unique film that explores a strong, independent female’s impenetrable will to survive. A one of a kind aesthetic, coupled with a fierce female lead is the formula that I believe makes “Night Night” so special. Brenna D’Amico, current queen of Disney, makes her debut as a serious actress in her film adult lead via “Night Night”. I’m so proud of the work she did in the film and am thrilled for the rest of the world to see what this entire team is capable of. I believe this film will have audience members on the edge of their seats the whole time and makes for quite the dinner table debate after. The feedback on the film so far has been incredibly positive. “Night Night” is a refreshing new take on a female driven psychological thriller that the world is more than ready for.