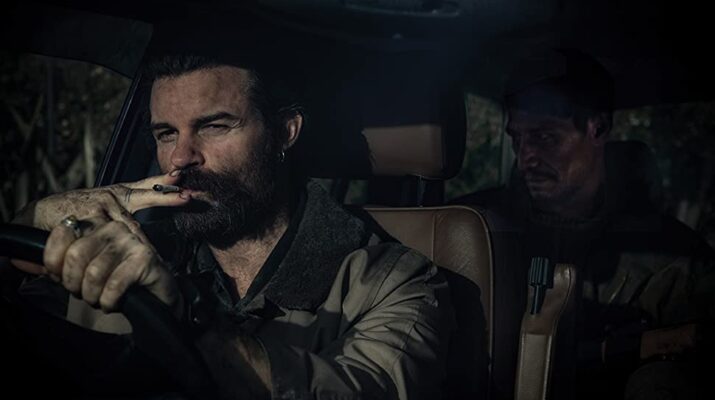 Here are some of the horror DVD/Blu-Ray releases for Nov. 9th!

Fin, a wanted criminal, hides out with an escort named Val, a demon. Val offers to make his problems disappear if he follows her rules. She has been expecting him all along and it won’t be easy to escape Val’s dungeon.

A family’s outing descends into terror when teacher Alan Hoaganraad, his wife Jill and stepsons Maika and Jordon explore an isolated coastline. An unexpected meeting with a pair of drifters – the enigmatic psychopath Mandrake and his accomplice Tubs – thrusts the family into a nightmare after the duo kidnaps them and embarks on a road trip to hell.

A malevolent religious cult stalks a French village, kidnapping prostitutes and subjecting them to unimaginable torments under the guise of saving their souls. When a young man’s girlfriend is taken by the sect, he teams up with a mob of angry pimps to track down the maniacal, holy rolling killers and put an end to their bloody mission, once and for all. A tense, stylish thriller from the legendary French studio that brought you ZOMBIE LAKE and PANTHER SQUAD and directed by the man behind the notorious BURIAL GROUND, MANIA KILLER stars exploitation movie heavyweights Bo Svenson (WALKING TALL PART 2), Robert Ginty (THE EXTERMINATOR) and Chuck Connors (TOURIST TRAP). Full Moon is excited to be presenting this obscure shocker totally uncut and remastered from the best available materials found in the Eurocine vaults. Bonus features include: Trailers

Four young women embark on a road trip to the mountains for a weekend getaway. Unbeknownst to them, a group of deranged hillbilly misfits follow them to their secluded lakeside cabin. At first, the women appear to be easy prey for the predatory perverts until the fateful stroke of midnight when the tables are turned and all hell, literally, breaks loose! Features Tim Thomerson (Trancer and Puppet Master series) and a crushing music score by Ministry’s Al Jorgensen. This 2-disc set (Blu-ray and DVD) includes the uncut theatrical version plus the re-imagined Director’s Cut with many special features!

Genre superstars Michael Pare (STREETS OF FIRE, EDDIE AND THE CRUISERS), Amanda Wyss (A NIGHTMARE ON ELM STREET, FAST TIMES AT RIDGEMONT HIGH) and Empire Pictures alumni Jeffrey Byron (THE DUNGEONMASTER, METALSTORM) join a cast of attractive newcomers in this tale of visionary Miskatonic University student Crawford Tillinghast, who follows in his late father’s footsteps and becomes obsessed with completing work on The Resonator, an inter-dimensional device that opens doorways to other worlds. With the aid of his closest friends, they manage to get the machine and running…with terrifying results! Full of exciting, sensual visuals and bursting with atmosphere THE RESONATOR: MISKATONIC U is Full Moon at its most fearsome. Turn on, tune in and freak out! Bonus features include: From Beyond To The Resonator Featurette, Full Moon Features Trailers

In this controversial Spanish film from 1974, originally released in the US as BEYOND EROTICA, David Hemmings plays Juan, a young hacienda-owner who abuses women due to his traumatic upbringing. His late father was a sadistic tyrant who treated the women who worked on his estates as his personal property. After his father’s death, Juan begins to act out his own fantasies. His favorite “game” is to have the women dress in rabbit fur bikinis while he chases them through the jungle on horseback with a pack of dogs. One day his latest plaything gets caught in a trap and is savaged to death by the dogs. The local people know what’s going on but are powerless to stop it as their livelihood depends on work from the estate. Juan’s mother, Louise, played by Alida Valli, tries to find a suitable replacement for the dead girl. But Juan has his eyes set on Lola, the beautiful daughter of one of the estate workers. When Lola turns him down, Juan imprisons the girl in an abandoned horse training yard and sets to work breaking down her resistance. But things do not work out the way he planned.

A new lethal, powdered drug hits the streets and its consumption is spreading a wave of crime and murder across the city! When two private detectives, James and Patricia, are hired to find a missing person named Cassidy, several clues lead them to a strange church established by the charismatic high voodoo priestess, Mama Dominique. They discover that the priestess rules a parish of punk thugs who obey her every command and distribute the viral zombie powder to create an army of subservient and blood-thirsty zombies!

Animated parody of such horror classics as Evil Dead and The Hills Have Eyes.