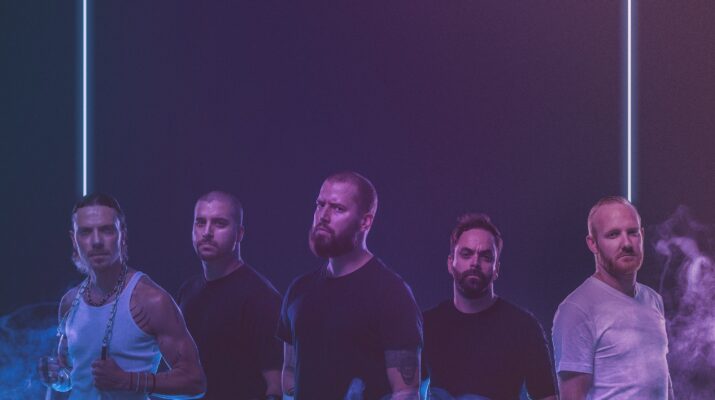 Toronto, Canada’s My Hollow has a new EP coming out entitled “Fighting The Monsters”, which they are anxious to release upon the world next year. Taking inspiration from modern death metal bands, they are continuously evolving and this next release from them is no exception.

My Hollow last released an album in 2015 and since then have grown exponentially, culminating into a 25 minute, five-track EP that is, by far, some of the heaviest music they have ever written, and to take it a step further, they have added keyboards for the first time on a recording. While this addition may alienate some of the more hard-headed and traditional metal listeners, others will see it as a welcome breath of fresh air. The band explains the album in their own words:

“We want to give listeners a hard-hitting product that keeps them wanting more. We really focused on bringing our new sound into this album but still worked to keep some old-school elements of what had been true to our sound in the past. In terms of overall listening experience, we hadn’t focused on the album as a whole as an experience, however, we take great pride in structuring our songs in an unconventional way that makes the individual songs more interesting and less formulaic. We hope that the listener can extract their own joy from each individual song.”

For My Hollow, the songs sometimes come together very easily as if they were writing themselves and other times, they need to be put together like a broken puzzle. The process is never the same as every song is unique. The lyrics are written after the music and for this EP, the main inspiration was drawn from battles, whether those battles be internal or as an outsider looking in. The main focus for each song was to have its struggle and perseverance, its own battle, and its own victory.

“Fighting The Monsters” was mixed and mastered by Tyler Williams at Monolithic Productions and the artwork was done by Jennifer White. It is recommended listening for fans of Chimaira, Gojira, and Lamb of God.

“Fighting The Monsters” is slated for release in Spring 2022 and a taste of what’s to come can be heard at the following teaser shared by the band – https://youtu.be/8w7QRvpntb4​

About:
hollow: (1) a place or area that is lower than the area around it.
(2) an empty space inside of something.

The definitions of the word hollow describe My Hollow fittingly. With intense riffs and passages seamlessly giving way to lower, heavier parts in a lock-up, chunked out style with mutes leaving empty space in an otherwise chaotic sequence.

Based out of the Toronto area, My Hollow boasts a cast of independent metal journeymen, hungry to be heavier, tighter and more engaging with every song. Applying advice and drawing experience from performing alongside some of Canada’s biggest metal exports; The Agonist, Cryptopsy, Threat Signal, Beneath The Massacre among others. My Hollow as a whole can draw from a multitude of influences, not only from metal but from other genres as well, reflected in both their recorded releases as well as their live performance. Described by Danish webzine Power Of Metal as “five pissed off Canadians ready to tear my head off!” As well as “all the subtlety of a two-ton anvil slamming down on a set of pearly whites” by US based heavy metal blog, Heavy Metal Time Machine.

My Hollow has two official releases, 2012’s ‘Cold Dark Days EP’ featuring four demo versions of songs which were reworked and reimagined on 2014’s ‘On Borrowed Time’ full length release featuring My Hollow’s most refined and focused work to date.

Like any band, My Hollow has had its highs and lows. Being selected as a finalist for the annual Wacken Metal Battle Canada 2013 solidified My Hollow as one of Toronto’s, as well as Canada’s top metal acts and announced themselves to a broader spectrum of listeners. Although narrowly missing out on a spot to perform in Germany at heavy metal’s premier festival the experience proved to strengthen the bands resolve and galvanize their confidence in the process.

While the band’s recorded releases give the listener an idea of what My Hollow is about, the live performance is where My Hollow truly shine. “With a crushing wave of energy, and sound, My Hollow filled the venue with their effervescent presence. The lads never disappoint on stage,” is how Toronto based metal publication Metal Master Kingdom described their experience.

With a new EP “Fighting The Monsters”, which includes guest vocals from Bjorn Strid (Soilwork) due out in 2022 and an ever-evolving sound and live performance, My Hollow strive to become an ever-present staple in the Canadian and global metal scene and will stop at nothing to leave you hollow, and wanting more.