One baby. One rifle. One dog. Three million zombies!

CEX Publishing is proud to announce that Mother Russia returns to comic book shops and speciality stores next Wednesday.

Return to the frozen winters of 1945 Stalingrad in this all-new, all-silent 24-page one-shot from series creator Jeff McComsey! Follow along as our intrepid gang combat the cold, Nazis and even worse…zombie Nazis! 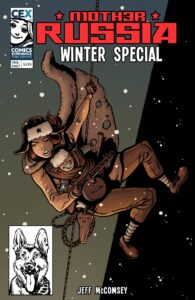 Hell’s about to freeze over and you won’t want to miss it! 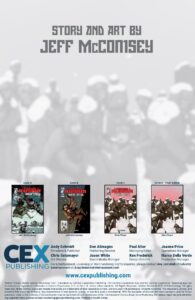 Stalingrad. Winter. 1945. One baby. One rifle. One dog. Three million zombies! Hell’s finally frozen over and the gang decides to stretch their legs. Another World War II zombie love song from Jeff McComsey, the writer of Grendel, Kentucky (AWA) and artist of Son of Hitler (Image Comics)!

Please visit www.comicshoplocator.com to find a shop near you

AMULET Now In Theaters and On Demand