EuroObscura just released a new trailer for the occult – witchcraft horror from Italy THE SALAMANDER HOUSE. The movie will be introduced to the buyers at the Cannes Film Market this week.

THE SALAMANDER HOUSE has been screened recently at the Weekend Of Fear in Germany, a major event for horror movies in Europe, after a successful international premiere at the Italian Horror Fantasy Festival. It is produced by Luigi Pastore (VIOLENT SHIT, SYMPHONY IN BLOOD RED) and directed by Marco Cerilli. It stars Marco Aceti, Corinna Coroneo, Marco Cerilli, Franco Nacca and Chiara Pavoni.

The story centers around a writer who isolates himself in a house on the beach to complete his new novel, only to find out that the house was the center of a wiccan cult in centuries past. The members of this cult were massacred in the past and now, these witches are craving for revenge by taking possession of the writer’s mind.

EuroObscura will handle international sales at the Marchè Du Film in Cannes, alongside other new horror movies like the Italian rape and revenge SCREAMS FROM THE SWAMP by Lorenzo Lepori and the Turkish QUARANTINE-19 by Can Sarcan.

A famous Italian-American writer of horror novels goes to Italy to spend a few days in an old house on the coast. The real estate agent tries to convince the writer to buy it, but he only wants to spend a few days there hoping to find inspiration. The history of the house begins to manifest itself with hallucinations, which the writer notes as ideas for his novel. He then meets some locals who tell him the story of a cult, that came to the house in the 1970s to build a temple dedicated to the Satan. The writer will very soon discover that the cult is still there and that he is only a tool driven by evil. 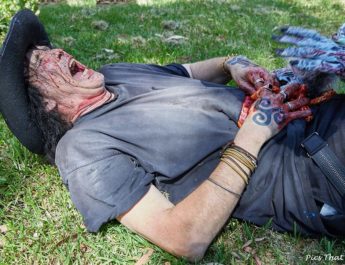 The Cameras are Now Rolling on Badass Bunyip

Trailer for GATLOPP Available On DEMAND and On DIGITAL June 16