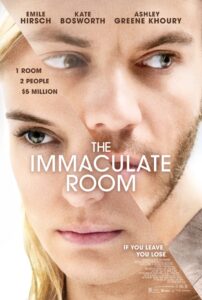 In Theaters & On Demand August 19th

Mike (Emile Hirsch) and Kate (Kate Bosworth), a seemingly perfect couple, join a psychological experiment to compete for 5 million dollars if they can last 50 days in a sleek, white room in complete isolation. No phones, no family – only the Voice of the Immaculate Room keeping them in check if they think of straying. But as the clock ticks down, the Room becomes more than it seems, putting them through cruel tests to break their resolve and resurfacing private demons which they may not survive.

Interview with Chris Bell, Director of “The Heiress”