Jacob Aaron Estes, who wowed audiences with MEAN CREEK and his Sundance 2019 darling DON’T LET GO, offers up one of his most personal and thrilling tales yet with HE’S WATCHING, which lands on U.S. VOD next Thursday, July 21st, from XYZ Films.

Creating the project with his wife, musician Gretchen Lieberum, and children, Iris Serena Estes and Lucas Steel Estes, during the height of Covid-19 lockdown, the filmmaker originally conceived HE’S WATCHING as a way to stave off his family’s boredom while trapped in their home.

What it became was much more than that.

When happy-go-lucky siblings Iris and Lucas (playing fictionalized versions of themselves) are left alone while their parents recover from an illness, a series of playful pranks they play on each other escalate when they start receiving unsettling images and videos on their phones. With the incoming messages becoming increasingly nightmarish, Iris and Lucas realize something sinister has taken root in their home. 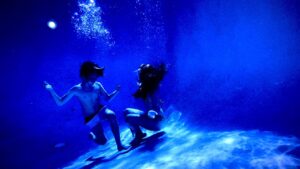 Featuring startlingly clever filmmaking and stunning debut performances from Iris Serena and Lucas Steel Estes, HE’S WATCHING builds into a visual nightmare that transcends not only the found footage genre, but all expected horror tropes.

Airing on COMET/CHARGE in November