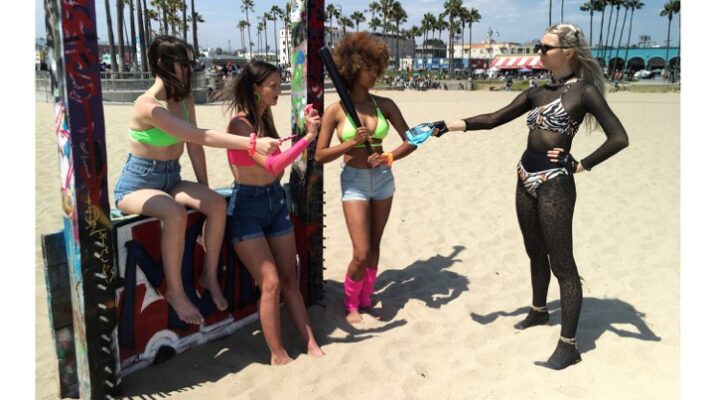 The hot new and highly anticipated indie flick from grindhouse horror director, Jared Masters, is now available to rent or own on Amazon Prime Video! Roller Junkies! Also available on DVD, packed with special features and, for the lucky few who think fast…The limited edition hand-signed and numbered VHS can be snatched on eBay (while supplies last) in blazing full screen Technicolor! The wait is over! And you thought this summer was hot enough already.

From the rave review from Mark Miller (Formerly Ain’t It Cool News):

“…A mockumentary investigating the death of Allison aka “Black Lips,” a wide-eyed country girl who moves to LA in order to expand her horizons. She immediately is taken under the wing of a roller girl gang called the Neons, who have a love/hate relationship with a rival gang the Animals. Masters’ fast and funny script bops from one member of the two gangs to the next in a documentary style interviewing each of them and highlighting their numerous quirks, showing that they would rather talk about themselves than the death of their friend. This is a smart and fast-paced film that drives the point home that the LA and Hollywood crowd are some of the most vapid and self-centered people on the planet, but does so in an often hilarious way…. Stand out performances come from McKenna Alvizo as the good-hearted Allison who gets swept up into this world. I also really loved the post-Valley girl line delivery of Elizabeth Rath as Krypto Kim. But all of the actresses that make up the two gangs are good, delivering funny lines in this smart satire on California living. This is one of those films that celebrates the punk outsider movement of the early eighties like ROCK N ROLL HIGH SCHOOL, SUBURBIA, and the like. It definitely is a niche style film, but Masters does a quality job of capturing the feel of the current, entitled generation. This isn’t necessarily a horror film, but it does deal with some dark themes.”

Official Selection at the Lift-Off Global Network Sessions in London! This motion picture is an experience like none other. A candy-coded “Who-dished-it?” The first of its kind. Colorful, creepy, crazy, outlandish but never crude, ridiculous in all the right places. Roller Junkies! Starring McKenna Alvizo, Elizabeth Rath, Rylee Singer and Jayda Raymond. Written by Jared Masters and Elizabeth Rath. Directed by Jared Masters (Slink, After School Massacre). See the film, buy the movie. You’ll never be quite the same once you survive the beach bunnies that kill, theoretically.

View the Trailer and discover more B-movie bliss at frolicpictures.com

HNN Presents: “Everybody Gets Stabbed” on June 29th – Pre-Order Today