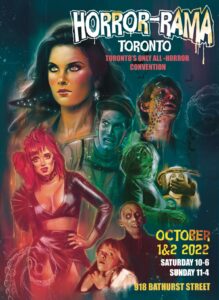 Throughout the 2-day event, HORROR-RAMA offers a massive 2-floor vendors market, an international short film festival spotlighting the best in new horror cinema, live performances from ghoulish theremin-fueled surf-shock band NIGHT CHILL and much more. The show is sponsored by Severin Films, BLOOD IN THE SNOW FILM FESTIVAL and Full Moon Features and is a fully licensed event.

Daily tickets, special event party tickets and weekend passes can be purchased at www.HorrorRamaCanada.com. Tickets will also be available at the door.